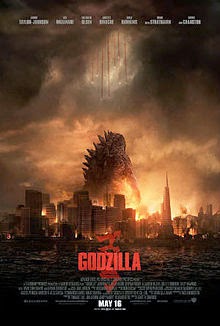 Godzilla is one of film’s most iconic characters. Spawning from a social commentary on Japan’s fear of the nuclear age, Godzilla has morphed and reflected social commentary through the times. He’s been an epic villain made of man’s arrogance, the wrath of mother nature, Earth’s grand protector, the lesser of two evils, a living nuclear reactor, a dinosaur on steroids, and in Hollywood’s first attempt at the franchise a giant pregnant iguana. Yet it’s Hollywood’s second attempt at kick starting a franchise that seems to have blended a slew of the previous descriptions into a rather impressive cocktail. Godzilla is both a unique reboot for the king of the monsters and one that injects enough of those ‘fan moments’ to make sure that new and old fans will be pleased. I know I sure as hell was impressed as I walked out of my showing.

Joe Brody (Cranston) cannot let go of the past. An accident at the nuclear power planet in Japan fifteen years prior has left him a widower and hollow inside emotionally, leaving his son Ford(Taylor-Johnson) on edge with him through the years. When Joe stumbles upon a massive clue to something that the government is hiding in the ruins of the power plant though, the two will become caught in a war between ancient beasts with a score to settle.

Intriguingly enough, it’s obvious that Gareth Edwards and company understand the formula of a Godzilla flick. Perhaps it’s because I did the massive Big G marathon of all 29 films prior to seeing this, but it was all there for the fans. The human portion of the story where humanity finds itself outgunned by nature’s monsters, the kaiju battles, and plenty of G Science (my brother and I came up with the term G Science for the mumbo jumbo that these films use to explain their ridiculousness plot devices) all make appearances in Godzilla. While Edwards does a few things to really modernize the film as a whole using much bigger scale including having a lot of the final act shot from wide shots from the street or far up in the sky, he understands what the fans want to see and generally delivers it even if it comes off as cheesy.

So let’s start with the human portion of the film. The Brodys (a nice nod to Jaws, by the way, which does play a fairly big role in how the film is structured too) are not your usual Godzilla flick fair. In fact, this portion owes a lot to early Ishiro Honda films or the spectacular Gamera films from the 90s in how the film layers in a more personal feel to the epic kaiju issues that occur in the background. While our two leads in Taylor-Johnson and Olsen tend to be given more reaction geared roles with simple motivations (get home and worry, respectively) the underlying familial issues play through in various elements of the film. The villainous insect like MUTOs are attempting to find one another and nest, Cranston’s father allows his family to fall apart in search for the truth, and the Taylor-Johnson/Olsen combo tries to show case the future hope. While it is not as effective as it might have been since the film does tend to cater to epic kaiju film structures, I was really digging into the thought and work that went into this aspect of Godzilla and it adds a nice human element to the flick.

Let’s be honest though, a majority of the people that are going to see this film are going to see the titular beast. Like many of the Godzilla films in the past, Big G is not necessarily the driving force for the film and thusly really doesn’t show up until half way through. The focus is on humanity’s reaction to a different threat, the villainous MUTOs. I am a huge fan that this reboot establishes a new villain for Big G to go fist-to-cuffs with instead of relying solely on established brands and the MUTOs live up to effort. I don’t want to give too much away about that portion of the plot, but it works in spades. Big G plays out more like the Earth’s protector element of the franchise here (although like Watanabe’s disheveled scientist seems to believe – he’s just doing as nature intended since the MUTOs are natural enemies) and by the time Godzilla does show up you’re already invested in his success and by the time the stunning finale shows up in it’s full destruction riddled glory you’re cheering likes it’s a damn sports event.

Gareth Edwards just gets it. He makes Godzilla a multi-faceted film layered with human morals, a touch of atmospheric suspense, and enough of those Godzilla moments that fans will eat it up. The structure and Godzilla’s cat and mouse chase with the MUTOs really builds to a finale that might be one of the greatest Godzilla third acts in the franchise if not one of the best action set pieces for Hollywood in the last decade. As a fan of Godzilla and a film critic, I was inherently pleased with this film on all levels. It’s just enough seriousness and thoughtful writing to make the cheesy kaiju and G Science elements worth the suspension of disbelief. Yeah it’s not perfect, but I couldn’t think of a better way to kick off this new era for the King of the Monsters.