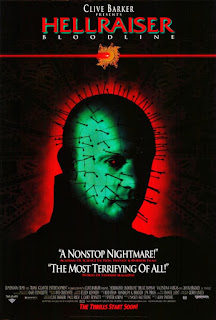 Well, well, well. In the words of Pinhead at one point in the third act of Hellraiser: Bloodline, "I cannot die. I am forever," and that certainly describes where the Hellraiser franchise is going. With this fourth entry, which is supposed to serve as sequel to the previous entry and an endgame for the series, all is feeling a little drawn out and a little over run with mediocrity. As with this movie too. A little long and a little drawn out despite the fact that even with credits it comes in at slightly under an hour and a half. Fans of the series might enjoy it as it somewhat returns to the thematic roots of the first two films, but it still suffers from a massive amount of flaws to hinder it from being a true return to form.


Hellraiser: Bloodline is a step up from the train wreck that is Hell On Earth that abandoned many of the atmospheric and thematic elements for the sake of a more consumable slasher inspired tone, but Bloodline isn't too much of a leap up the scale either. Ironically, this one starts off pretty solid and conceptually is, once again, very cool. This one has to do with the creation of the box by Merchant a long long time ago and it skips through three generations of his bloodline as they try to destroy the box that they created. It's interesting to see the box's creation and how it all plays out. Unfortunately, because of the story this film is pretty ill on flow and very poorly paced. There is almost no narrative flow as it almost acts like an anthology of stories based around the box and the demons released from it. Not to mention that some of the acting in this one is the worst of the series...the main guy just irritates the shit out of me (especially his future self that comes off as cold and unemotional.)

I really enjoyed the first two generations of Merchants in this film with a particular nod to the "present day" bloodline which feels a bit like the original films, but the space and future side of the film suffers greatly from poor special effects and a very anti-climactic ending. Really, as with almost all Hellraiser sequels this benefits from an interesting story and Doug Bradly as Pinhead (whom has some of his best lines in this one including my favorite - "Do I look like someone who cares about what God thinks?") but suffers from poor pacing, inconsistencies of story, and horrible acting. Not to mention the ending seems to drag on forever on the space station as it has no real impactful characters.

I actually felt that had they skipped the entire Hellraiser: In Space! concept and focused on the creation of the box and the threads from Hell On Earth then it would have been much better. Giving that odd team of Angelique and Pinhead a bit more time of banter and comparisons of what hell was to what hell is now, along with focusing on character development with Merchant the architect and his family and this would have benefited so much more. But alas they had to fit in the 'slasher' side of the film in the future and the new Cenobytes (which are a step up from Cd Man and Camera Man from III but far from being anything but screen padding in the end and still way too ridiculous...I'm still not sure how the 'twins' killed that one guy) into an ending that just felt like it was tacked on to finish the story. Bonus points for the Cenobyte chatterer dog.

Again, this is another frustrating addition to the franchise, which fails to impress beyond being entertaining with its kills and some solid thematic ideas. At this point, Hellraiser is still a great concept that has repeatedly failed to make it to film correctly since the first one. This one has its moments, but its odd storytelling structure doesn't benefit it at all.