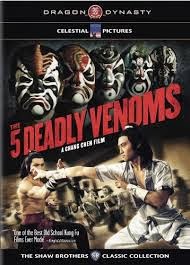 "You've just asked me "When will it end?" Well let me tell you: Once an evil deed is done, then it never ends... it goes on and it goes on forever." --Scorpion

So I finally got around to picking up the ultra-cult classic "Five Deadly Venoms" when Dragon Dynasty released their beautiful version of the film and I must say that it deserves a lot of the praise it gets. Of course, being from 1978 and part of an era where Kung Fu films were very cheesy, if you don't like the style of film then this one probably isn't going to change your mind. If you can put that all aside though (I think it takes a true fan to overlook the little things like odd sound effects and horrid dubbing) this is a masterpiece of Martial Arts film making.

Based on the idea of a school where five masters were trained, each in a specific style of combat based on venomous animals: Centipede, Gecko, Toad, Scorpion, and Snake, and let into the world, their master sends his latest student (who isn't fully trained) to clean up the mess he created with his students. This leads to a small town where the five venoms and the prodigy meet up to find a missing treasure and settle the score. On the outside the story sounds a bit basic but the way that the film goes about it is a nice turn of events. Using lots of dramatic elements like betrayal, coercion, and civil manipulation the 6 students begin a path that leads them down a road where collision is the only option.

Shot with a pretty standard Kung Fu style from the 70s and limited on budget, most of the focus on this film is placed on the story and character interaction. The thriller side of the film is quite fun (whose working with who, who will survive, and who the fuck is the Scorpion are all repeated asked by viewers) with lots of tension built between the characters. I wasn't so sure about how the prodigy student was really going to fit in by about half way through the film, but he gets his time nicely in towards the end.

As for the Martial Arts aspect of the film, most of the action is done hand to hand style but watching the various styles combat each other is quite fascinating and impressive. The final fight is one that could be studied for a long time with its pretty quick pace and non stop Martial Arts finesse.

This is a Kung Fu film that is beyond itself for its time. The story is clever and driven and the action compliments it perfectly. There is a reason that this is a classic and it deserves its attention. With a remake (supposedly) on the way perhaps it will generate a whole new fanbase with this film.