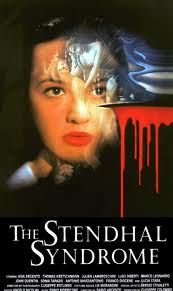 Don't get me wrong, Dario Argento is one of the most mesmerizing directors of our time, using all of his talents to craft some of the most memorable films from essentially some of the worst writing on the planet. The same goes for a good majority of his films including "The Stendhal Syndrome". Featuring his daughter in the lead role, this one tends to be one of the films many overlook in his catalog which is the reason I decided to take a look at this one.

Once again, this film is a split for me. Great directing, beautiful locations, and some great subtle acting from Asia tries to balance out a story that tends to jump a bit too much and suffers from some basic predictability. Thusly making it a visual feast but harsh on some of its depth and storytelling.

The film starts off with some great suspense and great visual tricks. For the first 20 minutes, this film will wrap the viewer in a blanket of confusion, horror, and awe as we follow Ms. Asia into an art gallery and through an odd reality/dream sequence which leads to the first of some pretty shocking scenes in the film. As police woman/anti-rape agent Ms. Asia (whom has a unintentionally funny to pronounce name of Anna Manni) searches for a serial rapist/killer only to have to endure some sick twists and situations, this film really cooks for the first half. Great suspense, some horrific scenes, and this odd dreamlike quality make the first half of this film a must see...unfortunately, about half way through the film takes a turn for the worse and becomes a rather cliche thriller. I won't give away the ending, but to say it was pretty obvious to me is an understatement. This predictability undermines the latter half's suspense and drama as it becomes a film we've all seen before. The only thing that saves the last act is Dario's keen eye for nice visual shots.

Acting wise, Asia is definitely the star here (duh!) and most of the supporting cast just get the job done with smile, or grimace, on their faces. I must say that I was impressed with the actor portraying the serial rapist/killer as he tended to steal the show with his unusually everyday looks but creepy as hell personality. At the moment when he gives her the 'razorblade smile', and no that's not some clever wording, I was at the edge of my seat yelling "oh you sick fuck!" very loudly cause he did nailed that performance.

Overall, "The Stendhal Syndrome" was a pretty descent film in the catalog of legendary Argento although it had a pretty lack second half and some of the script was borderline 'what the fuck?' moments. But, the first half in itself could have stood on its own and been a masterpiece and is worth the price of viewing this film at all.