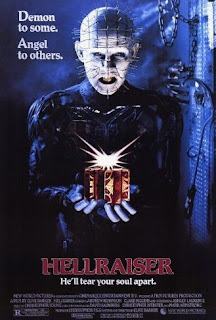 Whenever there are discussions about some of the most iconic horror films and franchises, it's notable that Hellraiser and its various sequels may be mentioned, but usually towards the end of the list. The degrading quality of the franchise is something of a trick though as the original Hellraiser is not only spectacular, but it still retains significant impact. Clive Barker's directing debut is a whopper of a film (it helps he wrote it too) and there are plenty of things to admire about this low budget masterpiece of atmospheric weight and horrific, meaningful gore.

Larry (Robinson) and Julia (Higgins) have decided to try and repair their crumbling marriage by giving themselves a change in scenery by moving into his old house. Unfortunately, Larry's brother Frank (Chapman) has been hiding out there and unleashed a hellish doorway. He's trying to come back, but he's going to need help to do so and it's up to Larry's daughter Kirsty (Laurence) to stop him. Even if it means unleashing a little hell herself.

At its foundation, Hellraiser is a film about domestic fracturing. And honestly, on its bare bones this story has been done before, but it's the details that make this story worth it. Character relationships, like the unusual connections between the step-mother and uncle and how the daughter is treated, make this film a little more human then what a normal story about opening the gate way to hell could have been if the focus was on the Cenobites and their arrival. It's these details with the characters, along with some stellar performances, are what make this tale so impactful and still very personal proportions.

Oddly enough, for a film crafted in 1987, Hellraiser has aged like a fine wine that allows its little nuances to only get better with time. Many films date far too quickly, yet Hellraiser to this day still packs as much punch as it was the first time I saw it. Clive Barker and company do a lot of great things on this film, including character development, flow, set designs, and of course the horrific special effects, but what makes Hellraiser such a great experience is the little things. Like the quick and precise editing, the bombastic classical and creepy score, or even just some of the sound effects like the chiming bells in the back ground of the coming Cenobites. For those of you expecting lots of Pinhead slash and dash slaughters like the later films, then be prepared to be disappointed. This is not a film about Pinhead and his revenge on the hellbound hearts of this world. This is more about the choices that individuals make and the repercussions that are had. It's a moral story if there ever was one, just in the guise of a clever and intense horror story with stunning special effects and atmosphere out the yahzoo.

I must say that Hellraiser is still one of the best horror films ever made in my book. It's lasted the test of time and even though some of the special effects and clothing may seem dated (although I would argue the return of Frank is one of the coolest ideas and creepiest scenes I have ever witnessed) this film is one that will last on the books for its universality and its unabated boundaries. 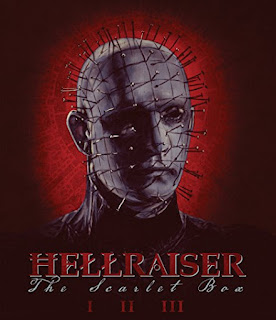 Recently, Arrow Video has released what may be the defining and ultimate edition of the first three Hellraiser films called Hellraiser: The Scarlet Box. The first three films are all covered in this box set and it includes some serious special features for fans. For the original film, not only is there the first part of the Leviathan documentary about the film (which clocks in as a full length feature), but the film is loaded with commentaries, interviews, and plenty of other goodies that any self respecting Hellraiser fan is going to want for their collection. The film is also restored in 2K for those looking for the usual Arrow restoration of the film. While the restoration is good, it's these special features that really make this release worthy of the purchase. You can check out the list below for the features that are available, but keep in mind this is just the features for the first film and this is a four disc set. As I work through the set, I will update our other Hellraiser reviews with sections like this one. Nonetheless, The Scarlet Box is one that will be a cornerstone of any horror fanatic's collection. This first disc is just the first cracks of what appears to be a hellish amount of fan focused additional features.