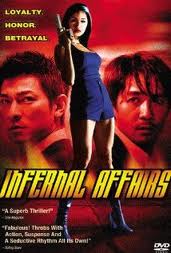 It's hard for me to say this, but...I saw "The Departed" before this. I KNOW! That makes me somewhat of a cult film poser in my own eyes but alas I was finally able to catch the brilliance of "Infernal Affairs" for myself. To say that its remake was brilliant is something of a feat, but I think that I prefer this version better due to its effective storytelling techniques and stunning performances.

Don't get me wrong - both versions are pretty damn good. But each features itself for the side of the world that they come from which makes each one slightly different from one another and thusly about equal in their awesomeness. It's the best way I could say it.

I think what I enjoy about this film more than the other is its sleek approach. Where "Departed" was about the slow burn effect of these two characters and how their worlds begin to collide and collapse, "Infernal Affairs" has more of a chaotic effect. Instead of strategically planned attacks and balances, the characters here tend to spiral and brace themselves for the inevitable course on which they are laid. To me, it made it slightly more intense and volatile which is why I love this one more.

As for performances, its hard to top that of Tony Leung and Andy Lau. They are pocket rockets from the get go on this one with their subtle and yet bombastic performances. They are truly the works of artistic prose on the screen with this film and it's a sight to see.

Honestly, I could go on for hours about what I loved about "Infernal Affairs" whether it was the clever editing, brilliant directing, or amazing supporting cast. But I think that this film is best seen on its own and enjoyed. Then deciding which version you enjoy more is the next step.