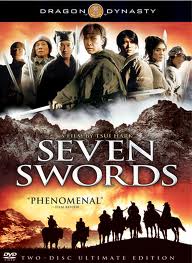 I had high hopes for this one. Normally, any epic sword tale featuring Donnie Yen is pretty solid in my eyes, but after watching "Seven Swords" I have to be more careful with my picks. This one just was a jumble and a half of a heaping ball of 'what the fuck'.

I like to start my reviews with the good things though and "Seven Swords" has some nice things going for it. Firstly, the cast is pretty fucking solid. Donnie Yen isn't the only awesome guy in this one and not only are the seven swords well acted but the bad guy Fire-Wind is pretty solid while most of the villagers have some great moments. Besides the acting though, this is a pretty solid visual feast too. Great settings (whether its setting suns or beams of light through trees) give this tale a very epic feel and some impressive solid camera work give this baby a nice sheen that helps it from being too much of a bumbleshit storm due to its rather confusing script.

That's where most of the best ends though because the script and flow of the film is pretty horrendous. There is some great dialogue interspersed here and there but the choices of scenes and jumps between time and focuses made me scratch my head and mumble to myself 'what the hell is going on now?' more often than not. This film tries to be so epic that it hurts most of the time. Odd choices for slow motion and cheesiness inserted tend to bog the film of its more serious and truly epic moments. Later on I found out that this is a film version of massive mini-series (of which I heard rumor of lasting about 9 hours) and it would take those 9 hours to try and straighten out what the story was moving towards. This story was too big for its run time and too epic to try and edit it. It's the truth and sadly enough this film just was unable to stand on its own in this form.

I must also admit that there were a few action sequences that were pretty badass. Firstly, the character Fu does throw a horse across a river with a net which was worthy of a few rewinds and the final sword fight was pretty amazing (especially on the walls). But other than that most of it was rather hm-ha when it came down to it as it tried desperately to focus itself on just getting as much story out there as possible.

I just really wanted this film to work and be epic and awesome. But alas, its too large for its own good and just ends up being a prime example of confusion on film. Looks as though I might have to go find the mini-series and check that out instead.