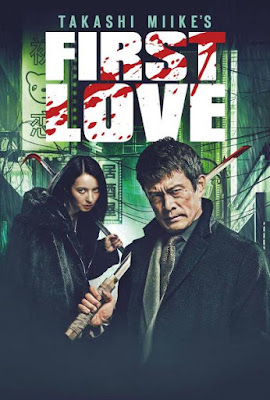 First Love, like many of Miike’s films, is less about one story or narrative and more about how multiple stories end up wrapping together. The film certainly centers thematically and emotionally on one plot though, where a young and very promising boxer (Masataka Kubota) ends up acting as a bodyguard for a young woman (Sakurako) as they run from the yakuza. The reason they are on the run is the focus of the second plot, where a corrupt cop and a traitorous yakuza henchman are planning on stealing a drug shipment in a scheme to get rich and, naturally, run awry of the yakuza.

While the plotting would seemingly flow in a natural way where our two protagonists repeatedly get into situations with the yakuza that lead to funny and/or action-packed sequences by pursuing some larger goal, the best part about First Love is how many of the key sequences feel like accidents or happenstance for the characters. Miike uses many of his auteur themes in the film, most definitely in how the film focuses on a lot of characters that feel like outsiders to the world they exist in, but the fun idea that many of the plot devices, character beats, and key moments all occur more as an accident than something intentional makes the film feel fresh and exciting. For example, the ‘girlfriend’ character played by Becky becomes an unkillable force of insanity as the film plays out. Her descent into being a wild antagonist to our protagonists creates a unique dynamic that feels both random and also fitting. By the time that many of the plots converge, resulting in a full-on brawl in the middle of a wares store with a slew of police outside, the film has repeatedly surprised all of its characters with its pathways and, subsequently, the audience remains surprised too.

As with most of the films from Miike, one has to expect that no matter how wild or strange the film gets, the execution will be of the highest quality. First Love fits right in. Whether it’s the subtle desperation of our boxer and the immediate chemistry he shares with his newfound girlfriend, the well-choreographed and impactful action set pieces, the pitch-black humor the trickles under everything, or even the strange choice in how they film the start of a car chase, this film delivers on all fronts. The performances are all pitch-perfect in navigating the genre-bending tones and the film is both visually grounded and still incredibly stylish in its approach.

First Love exists in that sweet spot as being a throwback to Miike’s earlier films, but still rooted as a fresh feeling modern gangster thriller. It features all of the elements that one expects from the director – the violence, the quirkiness, the style – and it soars on each of those levels. Not only are fans of Miike going to eat this film up, but it’s a fantastic introduction to his material for those perhaps unfamiliar with his extensive and diverse catalog. First Love pops with invigorating energy yet never feels disconnected from its emotional core and oddly relatable characters. It’s a film that is a must-own for all cinephiles.