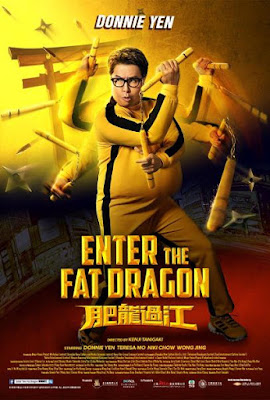 The cast is also game for almost anything in Enter the Fat Dragon, particularly Yen who is asked to provide a lot of broad laughs and still deliver some high-octane action. Granted, the fat suit doesn’t always look the best in many sequences and, let’s be honest, the handsome person in a fat suit joke thankfully died in the early 00s, but Donnie Yen is giving it his all here and he delivers in spades. He has a lot of great secondary cast members to help support him too. Particularly in how gleefully evil the yakuza villain is in the film, the romantic chemistry provided by Teresa Mo, and the fun and friendly secondary cast that ably brings comedic chops to the film. Nothing here is all that revolutionary, but the charm is maximized and it carries the film quite some distance from its basic concepts.

Most people who are leaping into a new Donnie Yen film are, more or less, doing so for the sake of the action. Enter the Fat Dragon also provides on that front. Impressively so. Donnie Yen plays a ‘supercop’ in the film and he gets to show off a ton of his abilities. The film, also being a comedy, gets to provide him and the stunt teams plenty of fun sets and set pieces. A fight in the back of a moving van sets up the tone nicely from the beginning and a series of meta-jokes about martial arts films (and how the main character is secretly obsessed with Bruce Lee) gives the rest of the film plenty to showcase. A few chase set pieces that occur in a fully built city street set are colorful and dynamic and the finale on Tokyo Tower provides plenty of thrills despite its obvious green screen backdrops. For a film that uses a romantic comedy through-line as its emotional center, the film is packed with skull-rattling martial arts action and it’s incredibly well filmed and choreographed.

All in all, Enter the Fat Dragon is a surprisingly fun and well-crafted action-comedy. Donnie Yen is bringing his all to the role, both in a funny and ass-kicking manner, there is an outrageous amount of action sequences and the charm of its cast and concept is oozing through most of the run time. The humor tends to be pretty slapstick and silly, so it can be hit or miss in those regards and the slick blockbuster look of the film doesn’t invoke the classic era of HK action, but for those with an open mind for modern action flicks there is a lot of laughs and hollering to be had with the film.