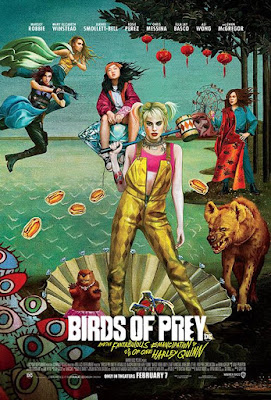 Set an undefined amount of time after the ending of the aforementioned Suicide Squad, Birds Of Prey begins with a recently single Harley, played again to perfection by a rapidly earning superstar status Margot Robbie, dealing with her recent breakup. There are a few things I wanna note immediately here, primarily that for a silly comic book action film, the breakup is handled in a really fascinating way. Quinn was physically and mentally abused, and Joker dumping her is an objectively good thing and Harley both knows this and says as much, but she still pines for him. She’s still in love with this madman and she’s not handling it well. She’s acting like a human being with emotions, something that’s slowly being explored in capes and tights media (the first act of Avengers: Endgame comes to mind). However understandable her emotional state however, Harley remains an impressive, athletic, intellectually superior criminal with astonishingly, and plot drivingly, poor impulse control. The script even remembers that she’s got a doctorate in psychology and she uses it to be almost impressively annoying. To point, she launches a truck into the famous Ace Chemicals to announce her new relationship status to the world after overhearing friends think that she’ll run back to the Clown Prince as soon as he snaps his fingers for her.

This very loud announcement also means that it’s open season on Ms. Quinn for all the people she’s annoyed over the years under Mr. J’s protection. Primary amongst those looking to extract their pound of flesh is Roman Sionis, AKA Black Mask. For something that’s being touted as a team film, the advertising is lying, by and large. The titular group is in this movie after a fashion, but only because they’re all being drawn together by a McGuffin in the form of the “Bertinelli Diamond”, an extremely valuable item lost during a mob takeover of the Bertinelli family in question. Desired by Black Mask and stolen by a young pickpocket, Cassandra Cain, much of the film is devoted to explaining how everyone fits into this small, but deeply (and pleasantly) convoluted story (as it’s being told from Harley’s perspective which stylishly makes the movie seem more complex than it actually is). Rosie Perez’s Rene Montoya is a cop whose work is constantly credited to her male counterparts and she is putting the story of the diamond together and wants to come after Roman above the board, despite resistance from her captain and the ADA who’s also her ex (played entertainingly by Ali Wong). Also running around is the “crossbow killer” Huntress, played by Mary Elizabeth Winstead in a way I’ve never seen her portrayed before, and it’s a revelation. The only complaint I have about Huntress is that she wasn’t in it more.

Every character has deep flaws, from Montoya’s alcoholism and 80s cop show self-styling, Huntress’ social difficulties, Cassandra’s hard knock life and there isn’t enough time in two reviews for Harley, so let’s just say it’s her tricky morality. Not just the heroes, though, as Sionis himself is cripplingly narcissistic and Ewan McGregor plays this in a way that’s scene chewing and brilliantly hilarious, until it’s terrifying. This movies’ inherent feminism plays out against the inherent sexism like Black Mask and his henchman Mr. Zsasz, the constant credit theft from Montoya, and the general underestimation of all female characters and it is really refreshing.

Other notable great aspects of this movie are action choreography, cinematography, and style. Everything is very punk and in-your-face like Yan was inspired to make a less annoying Tank Girl (though I love that movie and Lori Petty), and every action scene has some moment of exciting novelty or visceral brutality… either way, it’s breezy and very watchable. For her first feature, Cathy Yan seems to have a really decent sense of what needs to be in long takes, and what’s appropriate to cut like a music video and it’s constantly colorful and dazzling. I saw another reviewer refer to this looking like a hard “R” version of Joel Schumacher’s Gotham City and I’m inclined to agree.

Things that work less well are the fact that there’s almost an exhausting amount of action, more or less supplanting a second act with a few fight scenes that exist only to fill time before the plot kicks back into gear. The story is also frantic and disjointed, granted by intent and for comedic purpose, but disjointed all the same, so your tolerance for that may vary. Also, humor is always of course deeply subjective. I definitely had a giggle or two throughout the runtime, but I could see the jokes not working for some and the movie may be a rough ride for those individuals, since the movie banks on you being willing to laugh away an inconsistency or two.

Now that we’re all caught up, we can talk about this as an adaptation again. What does adapting characters like these mean? I know some fans want slavish recreations of the page and for them, this movie is going to be rough. Sionis isn’t in his mask much, and they’re definitely committed to McGregor’s interpretation. Zsasz isn’t a serial killer, Cassie Kane not only isn’t The Spoiler, but she’s also nowhere near a path to make her Batgirl. That isn’t the movie this is. Actually, the movie plays out almost as a street-level crime drama with especially flamboyant characters and that’s not a bad thing. To this comic book fan, at least.

Birds Of Prey is a really good time at the theater and is continuing to prove that DC’s best move to combat Marvel right now is to lean on being different. Whether it’s the Scorsese-style crime drama Joker or the light-hearted family romp of Shazam!, it’s nice to see something different occasionally. Although there is sequel bait at the end of this movie, it’s in a way they used to do it, not in the modern “everything is connected” sense, but there are two or three threads left open that could be picked up and that’s a nice return to form as well. If you’re even a little inclined towards this kind of movie, I couldn’t do much better than suggesting Birds Of Prey.

Written By Sean Caylor
Posted by DarkReif at 11:30 PM