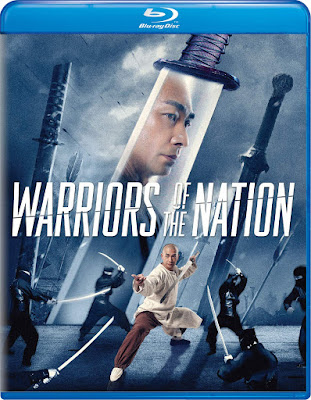 At a briskly paced 92 minutes, Warriors of the Nation lays some classic martial arts narrative and plot down. Unfortunately, as the film goes, it almost seems like it forgets there is any depth needed for the plot. As much plot that is delivered with traitors, evil cults, fake magic, political espionage, and a looming war on the horizon, it feels as though none of it is all that threatening and many of the subplots are left underdeveloped. Yet, the most problematic issue with the film is that its characters have no real arcs or interesting motivations. Wong Fei Hung’s romantic subplot feels like it’s jammed in for the sake of having it, the relationship he has with his students is patchy at best, and even the political element of the film feels like an afterthought to just getting the plot out there to keep the film moving.

If the writing, narrative, and plot are all thin and feel like secondary, then what mayhaps is the focus of this film? Well, it’s watching Wong Fei Hung kick a lot of ass. Quite frankly, this is exactly what most people purchasing this film are going to want most, so it’s not that bad of an idea. Warriors of the Nation certainly delivers on this promise too and, like its predecessor, invokes those feelings of early 90s Hong Kong that so many of us cherish. There is plenty of wire-fu on display here and lots of gimmicky characters to plug into some fun action set pieces. It really does invoke the spirit of classic 90s era Hong Kong action and for that, the film deserves some credit. The entire cast seems to be having fun here with it too, so there’s a positive energy that emanates from it in those regards.

On one hand, Warriors of the Nation does provide the basics for martial arts fans to enjoy the film. It is action-packed with lots of memorable choreography and some fun performances to go with it. On the other hand, it’s a film that doesn’t have much more than that. Even compared to its predecessor, it tends to feel thinly scripts and doesn’t deliver on the fun romantic subplots or intriguing elements of the 90s Wong Fei Hung films that give them depth and staying power. On a story and character basis, it feels like a hollow knock-off rather than the homage it seemingly intends to be. All in all, Warriors of the Nation is a fun, modern martial arts flick and an easy way to burn an evening, but it’s not going to resonate much beyond that.