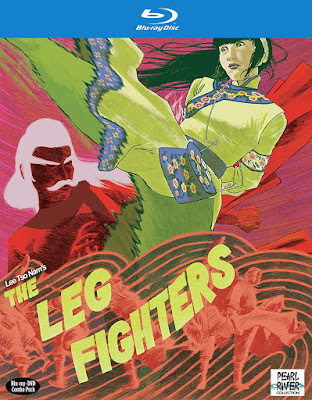 The last few years has seen a significant uptick in the amount and quality of proper releases for martial arts films from the golden age of the genre. For fans, like myself, it’s about time. Living in the realms of bootlegs and poor-quality editions, getting restored home video releases of so many overlooked classics is a miracle. When it was announced that the fan favorite The Leg Fighters was getting a coveted Blu Ray release through a new label, Pearl River, I was shocked. Most of the proper HK and martial arts releases were from the major two studios, Shaw Brothers and Golden Harvest, and the others have been buried to questionable DVDs and dubbed/VHS rips on the Wu Tang Collection via YouTube. In fact, prior to this release, I had only seen a dubbed low-quality version of this film. Needless to say, the fact that this film even exists in this format for the US means its worth buying for all fans of the genre.

As for the film itself, The Leg Fighters represents that period of time where many of the smaller production companies were trying to capitalize on the kung fu comedy elements that had made Jackie Chan and other stars at Golden Harvest sensations. The film focuses on a brash young woman named Phoenix who is being trained in kung fu. Although there are a ton of films that focus on the headstrong protagonist who must work hard while learning disciple and respect to take on the big bad of the film, there are not nearly as many films that feature a woman in the role and actress Ha Kwong-Li ably handles the job. She is given a comedic sidekick who handles most of the slapstick comedy as an inept servant, but the combination of the two provides plenty of charm to carry most of the film. This is partnered with a slew of gimmicky villains (including two with bells and silly names) and a couple of disciplined by well-meaning teachers – one played by the welcome presence of Dorian Tan Tao-Liang, and The Leg Fighters delivers on most fronts for what kung fu fans will want from a film.

The Leg Fighters is decently charming in its characters and its brisk pace moves through the motions and formulas relatively quickly.  The formula is ultimately predictable (once you’ve seen a few hundred kung fu films, it’s hard not to just write off the blue prints as part of the genre) but it’s carried by some fun choreography and the patchwork performances. Like most films of this ilk, the action gets stronger as it advances and fans will appreciate the diversity of set pieces that allow an audience to see Phoenix’s progression. The highlight, as expected, is the energetic and impressively executed finale as our heroes team up to defeat the evil villain. Predictable, sure, but it’s still entertaining as hell.

Notably, this latest Blu Ray from Pearl River features a new 2K restoration from the original 35 mm print of the film in its original language. As a fan who has only seen the film via a VHS dubbed version, the ability to see it in such a lovingly restored manner is worth it alone. Extra features like a new audio commentary by Michael Worth, interviews, and a fun intro to the film that goes a bit into the plight to get films like The Leg Fighters are all just additional worth to being able to see it in the best format this film has ever seen. 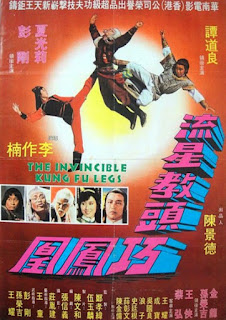 The Leg Fighters might not be the most unique martial arts film, nor does it always find that great balance between its comedy and action like some of its peers, but there is a reason that it has the cult following it does from kung fu fanatics. The film can be incredibly charming, particularly with a handful of great performances at the heart of its story, and the action build is delightful. The true reason one should pick up this new Pearl River collection disc is to be able to see it the way it was intended – restored with respect and in its original language.

The big question remains is what other films Pearl River expects to release in the future? No matter what, I’ll be there.