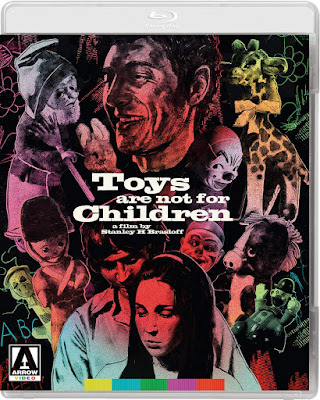 Although the focus of the narrative leans further into being a character study, which features a young woman trying to wade through her childhood trauma as she embraces being a full-fledged adult, it is intriguing that the film’s crux lies steadfast in an exploitative territory. Our protagonist, played with a fresh-faced and often childlike manner by Marcia Forbes, is obsessed with her estranged father. In some incredibly creepy ways. To the point that the film opens on her fully naked frame, caressing a large stuffed toy soldier in sexual ways while she dreams about her father. Toys Are Not for Children is a movie not for children.

The film sets up a tone that immediately states its intention for adults, but it doesn’t necessarily reside fully in its exploitative concept. As it goes, it attempts to punctuate the idea with layers as it showcases her life. Yes, the film deals with a woman exploring her sexuality, at first paralleled with her obsession with toys and innocence and then evolving into an odd fascination with becoming a prostitute to live out her dreams of being intimate with older men and calling them ‘daddy,’ but the film approaches it in a way that attempts to be more thoughtful than it comes off as on paper. Director Stanley H. Brassloff gives the film an often dream-like or surrealistic atmosphere, particularly in how he uses flashbacks to her childhood in key moments with punchy editing, and the performances and directorial choices never quite cross the line into being too erotic. Toys Are Not for Children rides that line with distinctive focus and even when the film starts to cross further and further into an abrasive territory, the entirety of the third act, in fact, there is always a sense that it does so for the sake of telling the story of its characters and themes more so than for delivering exploitative entertainment.

Granted, with that being said, Toys Are Not for Children doesn’t necessarily pull off everything that it intends. There is certainly effort on full display and a sense of artistry that lifts it above what it might have been, but the low budget and narrative can also be a hindrance.  Arrow Video has delivered a fantastic restoration of the film, but the rawness of its budget occasionally betrays its intentions as a film. The same goes for its themes about sexuality, parental neglect, and other social commentaries that it injects into its story. Toys Are Not for Children needs to be taken as a snapshot of its time period as many of its themes don’t hold up under 2019 scrutiny. However, the fact that the film even attempts the thoughtfulness to its script should be applauded to some degree.

Outside of the solid restoration, Arrow Video also packs in some great features onto this latest release of the film. In particular, there are three “appreciations” for the film on the disc (and some new writing in the booklet that comes with the initial pressing of the film) and all three have a lot of unique insight to the film and the context around it. I’m always a fan of Stephen Thrower – making me wonder why this one wasn’t part of Arrow’s American Horror sets, but the highlight is the new commentary by Kat Elliger who digs in and delivers some great perspective from a woman’s viewpoint. All of the material is great, but for my money, it’s her commentary that aces the features on this release.

All in all, Toys Are Not for Children is a fascinating film and one worthy of the release from Arrow. Despite its issues in driving home its messages or how the budget and style play at odds with the intentions of the film, this is one of these intriguing pieces of cult cinema that deserves a bit of light to shine on it for the things it does admirably and the chances it takes. It’s not a film that exists on an entertaining level which will find the larger cult audience, but a large part of me is glad this is out there to be seen. 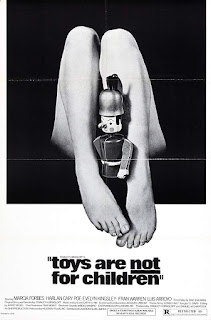 Written By Matt Reifschneider
Posted by DarkReif at 7:05 PM