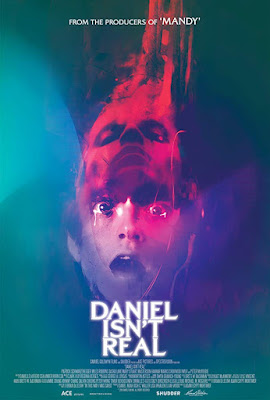 At this point, while the term ‘elevated horror’ is making the rounds, I feel like we should address the latest trend of ‘neon horror.’ Can we make that a thing? The Neon Demon, Mandy, Bliss, and a dozen other films have all come out in the last few years that utilize throwback aesthetics like heavy synth scores, saturated neon lighting, and throwback visuals. Well, regardless if anyone else is going to use the term, I am. More or less because this is exactly where Daniel Isn’t Real falls into. Surrealistic horror with an old school approach to the visuals, but a modern approach to the narrative. While I adore all of the films mentioned above (that’s also just horror – let’s not even get started on the neon elements of John Wick and how that has affected action cinema) Daniel Isn’t Real handily belongs to that group. It’s a manic ride through the urban setting of its youth culture, slyly integrating social and moral commentaries into a film that increasingly feels more Clive Barker-esque as it unravels. It’s enigmatic, engaging, and most fittingly – entertaining. Not only will this end up being one of the best horror films of the year, it could very well find itself on the best films of the year list.

The problematic part about reviewing a film like Daniel Isn’t Real is that the film leans so heavily on the experiential portion of connecting with its audience that, to truly talk about why this film works, it would spoil so much of its plotting and character beats. It’s a fuckin’ great problem to have. The start of the film features the protagonist, Luke (played later by a character-defining performance from Miles Robbins,) as a kid who is revealed to be from a rather volatile home life. When he sees the aftermath of a vicious mass shooting on the street, his imaginary friend Daniel first appears. Although Daniel allows him to cope with his situation and give him a friend to talk to, Daniel eventually starts to push Luke in some problematic ways and with that, and the help of his mother, he locks Daniel away. Fast forward to Luke as a college student where his life is perpetually disappointing and, in an attempt to free his imagination and work on his own mental state, he unleashes Daniel once again.

A large part of Daniel Isn’t Real feels like it’s meant to be the Fight Club for the next generation. Many of the same concepts remain including the use of an imaginary friend of extreme toxic masculinity, an undercurrent subtext about mental instability, and a fantasy-like sense of style. It just handles those themes and weighty ideas in a different manner. Daniel Isn’t Real isn’t much for replicating the films its pulling influence from, but it certainly takes some of the better qualities and mixes them together with its own sense of identity. The concoction is intoxicating.

Director Adam Egypt Mortimer comes out all guns blazing on this sophomore effort too. As mentioned previously, there is a visual style to the film that encompasses both modern and throwback values. The use of synth scores, the neon caked lighting, and the growing existential surrealism of Luke’s descent and rise against his imaginary friend give the film immense amounts of tone and atmosphere. With the stellar performances, including a career-defining high for both Miles Robbins and a truly fascinating turn for Patrick Schwarzenegger, the film rarely has a weak spot to think of and even the romantic subplot, given some very palpable energy by the chemistry between Robbins and Sasha Lane, is well integrated into the main conflict of the story.

To go much further would undermine the experience of watching Daniel Isn’t Real and although there are a few reveals in the second half that felt like they needed a bit more exploration at times, the well-executed and intriguing film that is delivered remains one of the best this year. It’s unnerving, it approaches the anxieties of modern youth in a fascinating way, and the execution is top-notch. Daniel might not be real, but the quality of this film is.