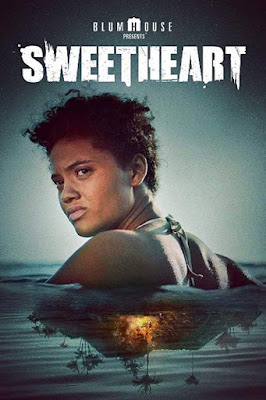 As cinema continues to become more expensive for patrons to go to the theaters, the general clamor for bigger and more spectacular entertainment only becomes stronger. There are certainly counterpoints to this movement, but the percentage of films of a more intimate or smaller scale are quicker and quicker to be bumped from a wide release and onto streaming platforms. This is a trend that certainly ignites quite a few debates, but it’s a trend that is only becoming more prevalent as time passes. On the other hand, there’s a slew of great smaller and more intimate films that are still being made to help level out the playing field. Although I was fortunate enough to have the chance to see Sweetheart on the big screen via the Telluride Horror Show, this is a film that Blumhouse understandably sent to the smaller screen. It’s a fantastic film for what it is, but it doesn’t necessarily match the buzz and bluster that theatrical going audiences would want to visit in a wide theatrical release.

Don’t misunderstand the initial point of this review. Sweetheart is a great way to burn an hour and a half as an efficient, lean, and mean piece of survival horror cinema. It exemplifies the Blumhouse model of filmmaking in a lot of ways, even if the sunny island setting and very limited cast lends itself to something a bit different than the usual dark and punchy flicks from the now-iconic production company. There is a simplicity to Sweetheart that digs into the always welcome ‘less is more’ ideology. The film essentially features one character who finds herself washed on the shore of a small tropical island after something destroys the boat she was on. From there it’s a game of survival as she encounters a monstrous semi-aquatic monster with predatory aims. There’s only a couple of other characters that pop up in the second act, but for the most part, his film is a woman vs monstrous nature narrative and it lends itself to be quite the entertaining little flick.

As much as Sweetheart wants its shark man to be the key thing to remember, going so far as shifting gears into a Predator rehash for its third act complete with blazing fires, spiked sticks, and lots of yelling, the real reason this film works as a survival flick is the pairing of actress Kiersey Clemons and director JD Dillard. There is an almost justified serenity to Clemons, as the lead heroine, as we watch her strategically problem solve her situation through the process of several days. Particularly in the first act, the performance never becomes silly or unrealistic and director Dillard smartly doesn’t try to pander to tropes like having her talk to herself as she problem solves. The film focuses on the decisions and letting its viewers put the narrative together instead of walking them through it with unnecessary exposition. The inclusion of two more survivors from the same crash, including our lead’s boyfriend, seems almost a betrayal to the simplicity of the core idea. This plot point increases the conflict and gives the heroine a new “obstacle” to overcome while padding her backstory, but there is a sense that this is exactly what it’s meant to do and it’s hardly subtle with it. Dillard handles it remarkably well considering, but the inclusion does seem a bit offsetting based on the strength of the first and third acts.

The horror element of Sweetheart is incredibly well executed. Whether it’s the introduction to the monster, the manner that the effects are executed, or how the film presents it – keeping it mostly off the screen for a majority of the film, there is a sense of classic tension around it. Once the film picks up pace, it does tend to hit a few classic tropes, but it does it with vigorous energy. The comparison of the final act to Predator still stands, but there is a fun sequence where the audience gets to see the monster in action underwater and it’s done in a strange dream-like quality that immediately sticks out from the rest of the film. The slight diversity in each of the horror set pieces keeps the film moving but the cohesive whole from the atmosphere to the more action-oriented moments fits well.

Sweetheart remains a stark reminder that even in a film that could have easily pandered to the spectacle with its island setting, shark monster, and flaming third act there is a truth to stripping a film back to the basics that works. Like its protagonist, it’s a film that has to make smart use of its resources in terms of location, budget, cast, and concept and, while the film still hits many of the tropes, it does it with a sense of style and simplicity that adds to its charm.