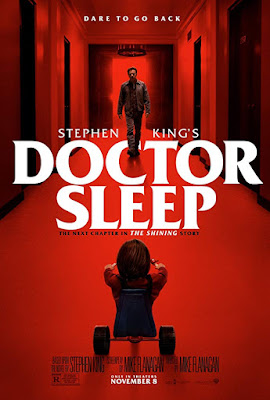 Doctor Sleep has all the ingredients to be either an unmitigated disaster or an unambiguous victory. Positioning itself as a follow-up to both the book and filmic versions of The Shining while having to tell its own, largely unrelated story. That’s a lot of juggling for any film, but add to the metaphor that two of those flying balls are hand grenades, and I mean that in the sense that director Mike Flanagan has to show proper reverence to two masters.

The Shining, as a book, is on the shortlist of absolute Stephen King masterpieces and is unambiguously supernatural in its telling. There is no question that the ghosts that Jack Torrence sees are literal, and the whole thing, although thematically and metaphorically about addiction, is real and is really happening. The Shining, as a film, is on the shortlist of greatest films ever made period, directed by a man who never produced a single dud and is nothing but ambiguous about everything in its telling. Focused almost exclusively with Jack Nicholson’s far less hinged and sympathetic take on Torrence, this movie is an exploration of abuse, isolation and madness, while maintaining the theme of addiction. Suffice it to say, King famously loathes the adaptation, which is the final wrinkle in what makes the concept of a Doctor Sleep movie so wild.

Doctor Sleep is an epic, sprawling, years and miles spanning narrative that threatens to fall apart at every turn, yet is narratively and emotionally satisfying, and frightening in a different way than its predecessor. Mike Flanagan is proving exceptionally adept at keeping stories like this glued together with expert pacing and tension. And there is nothing quite like when a high caliber actor is working with a high caliber director, such as Ewan McGregor putting in one of the performances of his career as adult Danny Torrence and Rebecca Ferguson as the terrifying wolf-in-sheep’s clothing, Rose the Hat. Almost more impressive is newcomer Kyliegh Curran putting in an equivalent performance, if you’ll pardon the pun, shining as bright as anyone else in the movie.

We start mere weeks after the conclusion of the original and Danny has refused to talk since the incident, and has been haunted by the hotel’s ghosts, especially the crone of room 237. We learn that Danny is still talking to the ghost of Dick Hallorannn who teaches the still young ‘Doc’ that dark things are attracted to those that shine, but that same thing can be used to fight the darkness as well. He teaches Danny to trap the ghosts with his mind. Briefly, the psychic element of the original was interesting and well shot, but not especially the focus of the story. Doctor Sleep doesn’t have that luxury, as psychics and mental battle are very much at the forefront of this film. Luckily, Flanagan is more than up to the task of making this visually interesting, but also discernible in its effect. It’s really quite an impressive feat of filmmaking and this is exemplified well early on with the ghost trap. The film focuses on a ghost, then Danny, a closed box in the snow (in the hedge maze labyrinth the Overlook, a nice detail), Danny, the same box but open, the ghost, then the box closing and the ghost isn’t there anymore. The whole thing happens in moments and it’s a very simple editing trick, but dastardly in its effectiveness. We then jump to an adult Danny and he’s an absolute train wreck. He makes his way to a small northern town where he’s eventually offered a job as an orderly for a hospice, and slowly finds his way to sobriety.

This is contrasted with Rose the Hat and Abra’s separate introductions. Abra, is introduced as a young girl at her birthday party. A party magician does a trick where he sticks spoons to himself and Abra informs him that she can do that too. We see her mother inside horrified at the sight of every spoon in the house sticking to the ceiling. We meet Rose at a beach, where she lures a little girl who seems to have a little shine herself onto a beach where it’s made quite clear that she intends the very young child some sort of harm, and from there we have our three main story threads in motion.

I didn’t describe this movie as “epic” casually. It has a structure and scope that is truly deserving of the word, and thematic elements that actually carry through the film giving them weight. 2019 has actually been a reasonably good year for movies and horror specifically, but even with that in mind it’s hard to remember the last time a genre film was this narratively satisfying. Or a non-genre film. Rose and her cult “the true knot” seek young psychics to feed off of their essence or aura, what the somewhat vampiric creatures call “steam”. The way this is portrayed is like a group of addicts seeking their next high, which is a perfect contrast to the recently sober Danny. This film also deals with power, being special, and a person’s responsibility to use their gifts for the betterment of the world. Danny only uses his power to comfort the dying, as something of a culling song. It’s beautiful and sobering. Rose uses hers to track down children that shine, and her cult all use their power to this end as well, as it keeps them functionally immortal. And between these two is Abra, arguably the most powerful of the three, but the youngest and most innocent as well. When Abra accidentally peeks in on the true knot murdering a young boy, in what is bar-none the most ghastly act I’ve seen depicted on screen in some time, they become aware of her and her power, and she has to seek out the only other person she knows that has the shine, her psychic pen pal Danny. From there the plot speeds ever forward towards a seemingly inevitable conclusion, which has Danny facing his traumas in figurative and literal ways.

Here Flanagan again proves himself extremely able to tell a story of generational family trauma (he and Ari Astor are neck and neck on this in the horror realm), overcoming addiction (without the movie being preachy about it), but also a very good vampire story and a really good and interesting story about psychics. I mentioned earlier this film served two masters in the context of Mike Flanagan and Stephen King, but it also serves the two masters of grounded realism and phantasmagoria, and it does this extremely well also. Doctor Sleep is destined to be a modern classic.