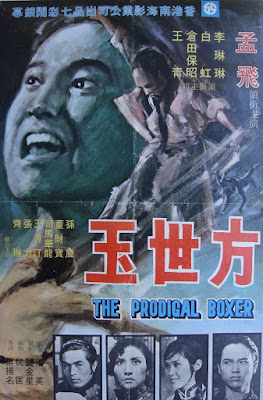 Previously we covered two other films by director Ulysses Au-Yeung Jun, the very entertaining double feature of Secret of the Shaolin Poles and Shaolin Drunken Monk. Both were surprising successes in terms of entertainment and quality, so the director quickly made it on my short list to find more of his work. Thus, we start here with The Prodigal Boxer. Starring Mang Fei, who was also the star of Secret of the Shaolin Poles which is often released in the US as The Prodigal Boxer 3 for marketing, the film follows him as the folk hero Fong Sai-yuk whose youthful nature gets him caught in the crosshairs of two brothers of a rival school, played by Wong Ching and the legendary Kurata Yasuaki.

The film itself is rather formulaic as our young hero ends up pissing off the villains who take revenge by killing his father. Then he must do the usual kung fu training to best them and get his revenge. When one breaks it down, The Prodigal Boxer is a blueprint of the usual kung fu flick. However, there is a lot of surprisingly solid elements at play here in the film. The romantic subplot is relatively well thought out, the relationship between Fong Sai-yuk and his mother feels legitimate and effective, and even the style of the film is rather ambitious for its obviously low budget. For example, during the sequence where the villains bust into the hero’s house and attack his family, director Ulysses Au-Yeung Jun intercuts the sequence with our young hero and his friends using their kung fu talents to try and help a young woman and her mother. The simultaneous fight sequences, one meant to be scary and emotional while the other fun and heroic, makes for a relatively great concept. Sure, the editing itself could use some tightening up and the dubbing certainly deters from the overall performances, but the ambitiousness of seeing the usual sequence of scenes thrown together with some artistic merit is worth noting and easily uplifts The Prodigal Boxer to the next level.

For martial arts fans, there is plenty of solid action to appease. While the majority of the film is certainly more traditional choreography of hand to hand combat in the usual (and cheap to film) fist fighting that’s at least partially directed by the iconic Lau Kar-Wing, it’s the third act that works best as they start to diversify the action with some weapon work and the great use of a stage setting to give it a more unique flavor that just the usual grassy plain. Mang Fei certainly struts his stuff in the role, leaning from playful to serious when needed, but he’s helped by a strong secondary cast where Pai Hung (as his mother) tends to steal a lot of the more emotional scenes.

The Prodigal Boxer ends up being a surprisingly fun and effective little kung fu film. It’s ambitious in some of its style, the casting is solid, and the use of some thoughtful narrative junctions make the formulaic blueprint seem much more than it is when it’s stripped down. Although it may not sway more casual fans of the genre, those die-hard kung fu fanatics will definitely want to dig into what The Prodigal Boxer has to offer.

Written By Matt Reifschneider
Posted by DarkReif at 9:20 PM