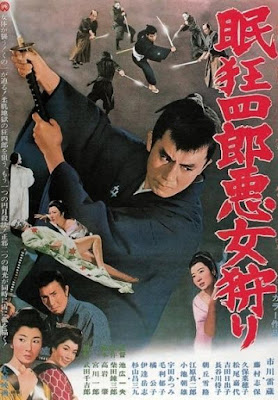 Raizo Ichikawa made the Sleepy Eyes of Death films. His performance, even when the scripts were patchy or the direction uneven, kept these films afloat throughout this portion of the series. He embodied the anti-hero characteristics and the razor-sharp expressions that betrayed his almost nonchalant, devil-may-care attitude. It’s because of his brilliant work that this twelfth entry, Castle Menagerie, has a tragic aura to it. There is a lot in this film about death and finding oneself face to face with a mirror image of one’s own flaws, a reflection that is both the same and inherently different. Sleepy Eyes of Death 12 is also Ichikawa's last portrayal of Kyoshiro before his unfortunate passing. Knowing this and considering the themes and visual styling of the film, the haunting aura of this film along with some of its bolder choices with the narrative and plot make it one of the best films of the franchise. A sad reminder of just how fantastic Ichikawa is as an actor and how quickly ones flaws can bring about their passing.

Part of me was a bit hesitant to go into Sleepy Eyes of Death 12: Castle Menagerie because it saw the return of director Kazuo Ikehiro to the fold. Nothing against the director himself and honestly, he can be one hell of a director, but his last outing in the franchise, the ninth entry A Trail of Traps, has easily been my least favorite of the series thus far. Although that one had some memorable moments, the overall mixture of tones and poor script made for a weak entry. Fortunately, for this twelfth entry, Ikehiro brings a stylish look to the film and a better script allows him to elevate the material. The film tackles some similar themes from previous films, but it uses the gimmicks more effectively, throws in a ton of memorable sequences, and features Raizo Ichikawa in his final role as the iconic Kyoshiro which gives the film its own sort of mystique.

The main theme, as mentioned above, has to do with Kyoshiro finding out that some corrupt rulers (as always) have hired a Kyoshiro imposter to start raping and killing people to benefit their cause. Initially, to somewhat humorous effect, out anti-hero does not seem concerned with this and it isn’t until the villains see him as a possible threat and try to kill him that he unleashes his Full Moon Cut. There’s this sense that the film is toying with that character and his world as a symbol of death. The film uses a lot of images of death within it, particularly a key scene that takes place in a brilliantly candle lit graveyard, and it pits this idea of the manipulation in the political and social elements that Kyoshiro must eventually face off against “himself,” but as a version with no personal code at all – a darker, full on villain version. At times, it’s easy to want the film to focus on this instead of a plot concerning the puppet master villains, but it finds a fantastic balance of the usual plotting with this newer thematic feel.

Beyond that, the execution of Castle Menagerie is effective and strong. As mentioned, director Ikehiro brings his A-game to the film, slathering the film in fantastic settings, a strong sense of atmosphere, and a wonderful balance of darkness and light in the visuals that comes across immediately. The performances, as always, are fantastic. Particular nots go to Ichikawa in the lead role and the brother and sister duo that represents the people manipulated into pretending to be Kyoshiro (to save their Christian sect which is another brilliant layer considering the history our anti-hero has with his own Christian heritage) which has its own plotting and narrative arc. The action is solid and fans of chanbara films are immediately going to buy into the entire film.

While there is a part of me that wonders if the film works so well because I kept looking at it through the lens of knowing that Sleepy Eyes of Death 12: Castle Menagerie would be the finale time I would experience Ichikawa in the role with fresh eyes, but looking back it just feels like this film works on all of its levels. The performances are tight and nuanced, the narrative layered and dense, and the style atmospheric and still highly entertaining. While it is still sad to be done with this era of the Sleepy Eyes of Death series, it’s great to know that it went out on a high note.