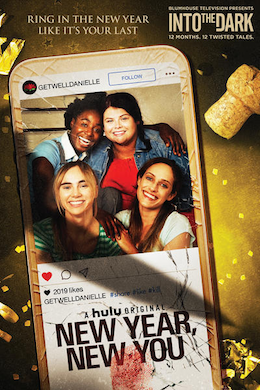 Hulu and Blumhouse’s horror anthology series, Into the Dark, has already provided a handful of fantastic little indie/intimate horror films through the last few months, but their latest “episode” (their first of 2019 that was technically released prior to New Year’s Eve in 2018) might be one of the best thus far. New Year, New You leans into a couple of interesting directions, looking to balance out an old school style with modern messages, and the results are overly impressive. It’s not a stretch that some horror fans may find the old school and very meticulous approach to building the film is a bit of a drag and there are a few choices that may seem a tag heavy-handed, but for my money, director Sophia Takal brings her A-game to this film and delivers a memorable way to continue this series.

Right away, New Year, New You throws down its old school approach for its audience. The opening credits, although this is a gimmick that is becoming more and more mainstream, looks like a classic old school film. This is the first moment when this style makes itself present, but quickly it becomes obvious that director Takal is going to run with this throwback style. The manner that the film lingers on moments, particularly key items that may (or may not) come into play for the plot later on, or the way that she uses zooms to slyly build and release tension give the film that older stylistic approach. This is partnered with how the film meticulously builds its approach, particularly once the various small ensemble cast gets settled into the house to celebrate the new year as old friends. It’s a slow and intentional burn that builds a lot of the mystery about where the film is going, only broken up by some jarring “flashes” of a different sequence to break up the atmosphere. Best yet, the style runs in stark contrast to the ‘viral’ videos that one of the friends has become famous for on social media which becomes a strong point in the themes that the film pursues.

To be successful though, New Year, New You required a strong cast to carry the film. Particularly since the film is nuanced with its plotting through a dialogue heavy first two acts and requires strong chemistry between the cast members to make the atmosphere work. Fortunately, even if some of the character development seems to feature a few questionable choices to serve the plot, the cast is able to pull it off. Suki Waterhouse serves as a fantastic anchor for the film with Carly Chaikin serving as the perfect balance to her with their performances. Their ability to be create an awkward sense of unease while maintaining that sense of long character history delivers scene after scene while both Kirby Howell-Baptiste and Melissa Bergland bring their own energy for the themes to come to fruition.

Normally, this would be the point in the review where I would go into some of the horror elements of the film, but to do so would betray how the film unveils its own series of surprises. New Year, New You works best for the audience to not know exactly what kind of horror film it is as it builds the mystery between these four women their past and their future. The atmosphere builds nicely to the reveal in the final act and once it kicks into that gear, it powers through to a clever thematic sting.

New Year, New You is certainly another strong ‘episode’ for Hulu’s Into the Dark. It shows, especially with the other episodes, that this series has a lot of talent behind a very diverse set of styles and approaches to horror film making. Even with that, Takal and company deliver one of the best so far of the series. It’s well crafted, atmospheric, and meticulously paced. New Year, New You might be a lot more old than new, but it’s well worth the time to ring it in.

Written By Matt Reifschneider
Posted by DarkReif at 10:05 PM