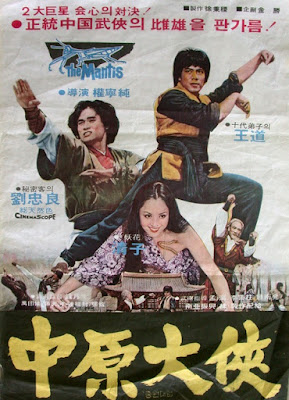 Also known as: Showdown of the Master Warriors, The Swordsman in Plains

After seeing Secret Rivals and its various sequels, I wanted to hunt down a copy of Death Duel of Kung Fu. The reason? The first Secret Rivals used the chemistry between John Liu and Don Wong Tao remarkably well and Death Duel of Kung Fu featured the two martial artists as the two leads that would ultimately team up (again) to face off against the evil villain. Truthfully, I had no expectations beyond that for the film. If it could entertain, I would have been happy. However, what I didn’t expect is for the film to attempt to add in quite a bit of plot intrigue and dramatic heft to the mix in the way that it did. Perhaps it’s a bit too ambitious for the quality of actors and budget it had, but the effort goes a long way and the rest, well…the rest is the entertaining kung fu that I wanted from it.

The film introduces the audience to Don Wong Tao’s character, who is caught in the middle of the ‘historical’ Ching and Ming conflict that so many martial arts films use as a backdrop. Of course, he betrays his General to fight for the people of China and has to go on the run. Most of the first half features a slew of various assassins attempting to take his head that are all sent by the villain of the film played with relative effectiveness by Eagle Han Ying. John Liu plays a wandering master who ends up caught up in the middle of this game of cat and mouse, looking for Don Wong Tao for the titular duel and you can guess how things go from there.

Outside of the strong choreography of the fights featuring Tao bringing some Mantis style to the mix and featuring some of John Liu’s iconic leg work, which is worth a mention for the sake of the relentless amount of fight sequences that the film manages to jam into 80 minutes, Death Duel of Kung Fu is not a particularly strong kung fu flick on most of its other merits. However, the film could have just gotten by on its fight work and not even try to add more to the rest. Even when it’s patchy in its script or terribly problematic in its direction (the use of dozens of intense zooms in any standard conversation of dialogue was funny at first, but horribly irritating by the end) the film has a feeling that it wants to be better. It wants to be more than it is, so it’s hard for me to totally disregard that.

Execution wise, Death Duel of Kung Fu is fairly sporadic. There’s not a lot of cohesive elements that work throughout the film. There are moments where the romantic subplot seemingly feels like it might tug on the heartstrings a bit, but other times it feels forced and awkward. The same goes with the political aspects of the film. It starts off with lofty expectations in building some intrigue, which, to be fair does come around again by the third act for a nice little plot surprise, but the film has trouble finding momentum with it as it diverts to a more standard and predictable kung fu narrative. The version of the film that was available to me is a dubbed one and like most of the dubbed films of this ilk, it does hinder any real strength of plot or character work that might have been there. If it wasn’t for the screen presence of the two leads, Death Duel of Kung Fu might have fallen to the way side instead of being the cult classic it has popped up as over the years.

Martial arts fans will know, overall, whether or not Death Duel of Kung Fu is going to work for them even before they go into the film. Keep your expectations low, enjoy it for its fun choreography, the two lead actors, and the silliness of its attempts at depth and you’ll have a great time with it. The film gets bonus points for attempting to add that depth in the first place, but overall it’s more of a middle of the road kung fu flick than anything else. Fun, but hardly the classic it could have been with some strong direction and more effective narratives.