Hammered in the Neck: Hammer's Dracula Franchise Part I 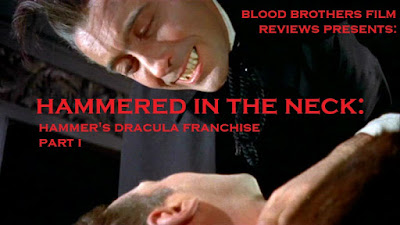 Due to the length of this franchise, it only made sense to split it up into multiple articles to prevent having one massive piece that people will tire of reading by the time they reach the third or fourth film. Since there are nine entries, it made sense to evenly split the articles into three films each. Naturally, we will be going through the series in chronological order. Part I will cover the first three films. 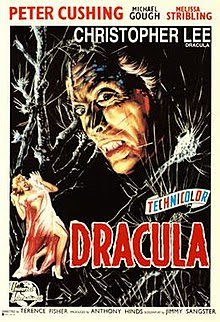 The franchise kicks off with Hammer’s adaption of Bram Stoker’s iconic story and those familiar with most renditions of this tale will immediately recognize the bones and structure of this film. Dracula, also known as Horror of Dracula in the US, is not necessarily the same film as the Bela Lugosi classic or the plethora of other versions of this story. This is Hammer’s Dracula and by God they put their stamp on it.

Mainly, the film benefits massively from the immediate Hammer style that was mentioned in the opening paragraph. Although the film features a very apparent three act structure, it often does not follow a strong and focused narrative. It plays with its characters and flow with an artistic fluidity that benefits the tone and atmosphere immensely. The use of the intricate sets, the sense of grounded detail, and the gothic aura all allow Dracula to immediately draw in its audience. The leaping narrative, which completely alters course after the first act with its voice over narrative and change in protagonist from Harker to Van Helsing, plays out in an almost Shakespearean manner of betrayal, loyalty, and drama. Anchored by some phenomenal performances, particularly from the first two credited actors Peter Cushing and Christopher Lee, Dracula inspires a lot of iconic imagery, but backs it up with nuanced substance and stylish execution.

If there is one thing that continually strikes me as intriguing about the film is how Dracula himself, blood shot eyes and manifested magnificently in the massive taut frame of Lee, is sidelined for a large portion of the film after the first act. He makes such an impression in that introduction (the manner that he runs leaping from a door and over a table to latch onto one of his vampire brides is still brilliant) that his presence is continually felt throughout the film until he reappears in the third act. Even then, at that point, he does not have much to say as it focuses on an intense game of cat and mouse until the finale to jack up the intensity. It’s an odd choice, but one that still works to create a dynamic that ultimately fits in with the tone and style of the film.

Ultimately, Dracula is one hell of a way to for Hammer to kick off their franchise. It’s a rather dark and often violent film for the era, the now famous look of Hammer blood is makes it all seem more intense than it actually is, and the suffocating atmosphere and brilliantly executed style and performances still make it one of the best that the series has to offer. With how the film ends, it makes sense that the series would go the way it does by following Cushing’s Van Helsing on his further vampire slaying adventures with the second film, the often overlooked forgotten “non-Dracula” Dracula film. 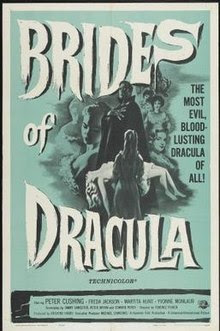 Although I do understand why Brides of Dracula is generally overlooked by many Hammer fans for its lack of actual Dracula (and thus, Christopher Lee,) I sincerely hope that doesn’t dismay too many people. Brides of Dracula is actually an outrageously fun film that has Peter Cushing, as the formidable ass kicker and doctor Van Helsing, stumbling into a new vampire plague. Although the film suffers a bit from being far more focused on exciting adventure and less on plot this time around, it does crank up the fun and entertainment to maximum force. As far as I’m concerned…no Dracula? No problem.

Once again, the film has an intriguing structure like the first where Van Helsing isn’t really introduced until the second act. This time we follow a young lady who stumbles into a small village that has been “cursed” by a rich family that seemingly hangs over them like a dark gloom. I’ll give you three guesses to why that is and the first two guesses don’t count…if you get my drift. What makes the film interesting is how it introduces the big bad of the film, played by David Peel. Instead of some powerful and intimidating force like Lee was as Dracula, he’s presented as a manipulative, charming, and rather arrogant vampire. This allows the film to differentiate itself from the previous one, even if some fans will dislike Peel in the role for how the film presents his character.

From there though, it goes through the motions of the usual vampire flick. Van Helsing rides in, starts some shit, and ends up on a crash course with Peel’s Baron character who is trying to create a plethora of vampire “brides” as his army. The second act does waiver a bit too much, not focused enough to truly develop some of the more interesting plot nuances of the script or the characters, but by the time it hits the third act, it jackknifes the narrative out of the way and guns it into full horror adventure/action territory. The finale is brilliantly memorable as most of it takes place inside a windmill and ends on one of the best final moments I’ve seen in a Hammer film.

Truthfully, the performances here are fun, but the film lacks some of the depth of the first one and for that it’s a slight step down overall. Much of its surface level adventurous approaches do make up for its flaws by having a ton of colorful sequences and a fantastic build to a wild finale. It’s almost a shame that it would take about 6 years before we got another entry into the series. In a way, the series loses a bit of momentum and this leads us to the next entry…which sees the franchise losing one star, but the return of the other. 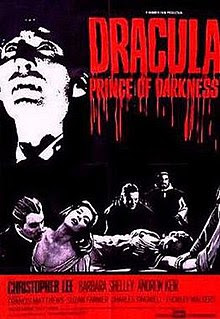 Unfortunately, I think my hype got a bit overzealous. It's not that Dracula: Prince of Darkness is a terrible film, far from it, but it certainly is underwhelming. Particularly compared to the fun and wholly entertaining first two entries. Outside of a fantastic (and visually stunning) ritual sequence where one of Dracula's human slaves resurrects his master, this third film felt as though it was more or less going through the motions rather than adding anything all that new or overly interesting into the mix. Partner that with some limited use of sets, a check list of Hammer Horror elements, and a rather underused Christopher Lee, Dracula: Prince of Darkness just feels a bit underwhelming despite some of its strengths.

The film is far more intimate than either of its predecessors, taking place mostly in and around Dracula's haunt and a rather small ensemble cast, and it does have a strong sense of atmosphere to it due to this choice. Granted, from some of the trivia I gather, this was due to the budgetary constraints and how Hammer needed to reuse sets for multiple films, but nonetheless the film does use these to its benefit. The performances are decent and we get some solid chemistry between the four main members that are drawn into being a part of Dracula's big comeback. The film does miss having a cornerstone performance like Cushing in a protagonist role to anchor the film, but the ensemble works. There is a bit of fun mystery to be had in the first half as it sets up the game board with all the pieces, but after the previously mentioned ritual (again, it's really creepy and effective) the film tends to crumble into tropes for the third act and seemingly runs through the motions.

Christopher Lee is given very little to do here outside of just be intimidating with his size and his bloodshot red eyes. Considering we at least got to see some layers in the first Dracula film, this comeback feels more like a glorified cameo. There are lots of speculation to why this is, where new footage of Dracula only appears in the second half of the film and he has fairly limited screen time and no dialogue, and whether it was intentional by the screen writer or a demand by Lee because his dialogue was so terrible is almost irrelevant. It just sidelines a fantastic villain and an intimidating performance either way. By the time the finale comes rolling around, attempting to introduce a new way to kill Dracula that's a bit baffling and feels as though it was added in for the sake of a fun last scene than anything else, Prince of Darkness felt more like fan fodder than a truly intriguing entry into the series.

All in all, Dracula: Prince of Darkness is just a fine film. Underwhelming compared to the first two, certainly, but outside of sidelining Lee as their big calling card to the second and a rather predictable and mundane third act, the film does have its merits with a decent ensemble cast and a couple of memorable moments.

No fear though, this is hardly the last Dracula film in Hammer’s series and it only takes 2 years for us to get to our next film – and the first to not be directed by Terence Fisher. However, you’ll have to wait for part two of our Hammered in the Neck series for us to cover the next three films – all with fantastic titles – Dracula Has Risen from the Grave, Taste the Blood of Dracula, and Scars of Dracula.