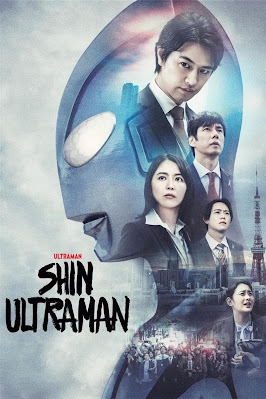 Over the last year or so, the Millcreek re-releases of the various Ultraman series have been a staple of my watching. Even more recently, I’ve taken to watching the “first” season of Ultraman every night. One or two episodes just before bed. It’s been blissful. The show is silly without losing its straightforward approach to its material, it’s colorful and creative, and it’s an adventure/science fiction show where the science team doubles as adventurers. The fun Ultraman battles that cap off each episode, where he goes toe to toe with various monsters and aliens, are icing on the proverbial cake.

Ultraman, the alien who fused with a human to become Earth’s protector, has never really left the social consciousness since that 1960s series as it continually evolves with each season and remains on the air and in theaters, but Shin Ultraman represents a fascinating aspect of the cultural icon. It’s both its own stand-alone story, possibly part of its own cinematic universe, and a remake of the previously mentioned original season. It threads the needle with an impeccable nuance, embracing aspects of its 60s origins but embracing enough of a modern aspect to modernize it for a new audience. Also, Shin Ultraman delivers on its promise of delivering kaiju-sized fun while doing it.

As its title would indicate, Shin Ultraman is part of the possibly blooming inter-series franchise that includes Shin Godzilla. While the director of that award-winning reboot of the classic kaiju, Hideaki Anno, does not direct this film and instead serves as a producer, his stylistic fingerprints can be felt throughout. Instead, Shinji Higuchi, mostly famous for his live-action adaptions of Attack on Titan in 2015, steps into the director's chair. He aptly blends Anno’s visual style and adds 50% silliness to the mix which ends up being a compulsive mix. It injects enough slapstick humor into the story and visuals to make the borderline-campy concept of Ultraman even more consumable for a modern audience and only briefly hints at some of the satire from Shin Godzilla.


The choice to embrace the overall silly concept does not come off as a parody. The film plays all of its material with a decent amount of seriousness, particularly once its script starts adding layers of villains and brings in its ethical questions about humanity’s self-destructive attitudes and the role of heroes. It’s a choice that prevents the film from ever really circling the drain of the uncanny valley and it’s impressively handled at almost every angle. It’s contradictory, but Shin Ultraman has things to say about the current state of humanity and manages to do it in some wildly fun and entertaining ways.

For those looking for some of that Ultraman Vs Kaiju/Alien action, you’re going to get it. Our titular hero fights five (!) various villains throughout the film. Yeah, five. Shin Ultraman wastes no time in getting its audience into the action, kicking off with a montage of the creation of the science-driven security force known as the S-Class Species Suppression Protocol (SSSP) that will be the heroes of this film. It throws down a ton of classic Ultraman kaiju villains in this intro, albeit it’s paced at a seizure-inducing speed, and gets the audience ready for Ultraman. 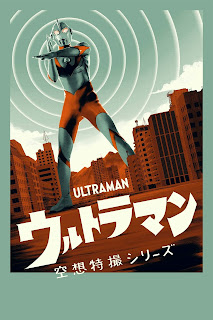 Ultraman, who, in perhaps one of the more fascinating aspects of the film, appears in the opening action sequence. Although a bold choice like that in not taking the time to develop the hero or his arrival is appreciated, it’s perhaps the one major aspect of the film that acts as a double-edged sword.

Takumi Saitoh portrays the hero, Kaminaga/Ultraman, as a stoic outsider trying to understand Earth. Because the film immediately introduces Ultraman so early, the film never gives the audience a chance to know Kaminaga before he is given the power of the heroic alien. Thus, his stoic approach to the character makes him one of the least dynamic ones (on the surface) in the film. He’s still a fascinating character, particularly when his character is given the ultimate choice against the final “big bad,” but it’s a much more subtle character and performance than the rest of the film deals with.

Granted, many of the characters around him are portrayed in a slightly tongue-in-cheek manner, particularly the film’s real protagonist Asami (Masami Nagasawa), they work within the style of the world in Shin Ultraman. Asami works as the audience’s surrogate for most of the film while Kaminaga drives the main plot forward and the duo ultimately works better than expected.

Don’t worry though, the action never stops in Shin Ultraman and, as I previously mentioned, it features five villains throughout to keep things fresh and moving. While many of the fights recreate key moments from the show (including a damn near impressive recreation of the Ultraman Vs Mefilas face-off), none of them feel all that redundant as it introduces the various skills and powers of the hero and various giants he battles. The choice to recreate the rubbery suit look of the characters certainly lends itself to the style of the movie and my own nostalgia, part of me wishes there were even more classic miniatures and rubber suits. Not that it ultimately detracts from the final product, but it’s wishful thinking. 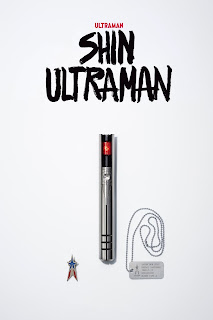 Finally, it should be noted that the ending of Shin Ultraman may be divisive for some audiences. The final 15 to 20 minutes fully embrace a kind of darker existential tonality while running off into a 1960s visual psychedelia that comes off as…well, a lot. Fortunately, the film’s tonality carries so much weight that even when it pops up it doesn’t feel like it’s inherently breaking the rules of the world we’ve been existing in for the last 100 minutes. It is a bold choice to end the film in that manner, but to give credit where credit is due, Higuchi and his team pull it off remarkably well.

While I found Shin Ultraman to be a rousing success in both managing to appease fans of the original show and re-imagining it for a modern audience, more casual viewers may not be able to buy into the style, silliness, or tokusatsu concepts that comprise the core values of the film. Higuchi balances all the tonal shifts and layers of the film with remarkable ease, although even his visual kinetic style may be too abrasive for some viewers, and Shin Ultraman manages to create a highly entertaining concoction that entertains with just enough smarts to sneak in some existential questions.

Side Note: In my theatrical audience, there was a little boy - maybe 8 or 9 - in a full Ultraman costume who ate up this movie. As my wife pointed out, there’s no way he could probably keep up with the speed of the subtitles or the more nuanced morals of its story, but - as she also noted - that didn’t matter. It’s a stark reminder of why a hero like Ultraman is important or a film like Shin Ultraman is important. It’s for kids like him. Kids who will grow to see the depth in a film like this and how it's layered to appeal to families while learning to appreciate characters from cultures that are not our own.