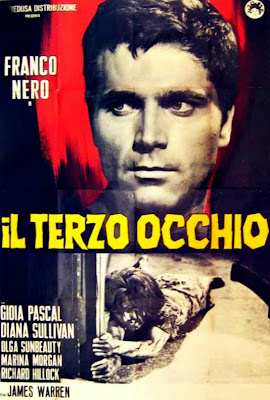 When Franco Nero’s name pops up at the beginning of a film, it’s hard not to get somewhat excited. Not that he’s always great (or is always cast in great movies), but he easily brings a kind of pop that can sway the tides of a film toward the positive.

Yet, despite the relatively strong word of mouth online in places like Letterboxd, The Third Eye is a substantially mixed experience - even within the films contained in this Gothic Fantastico box set. The first act is cheesy melodrama through and through and while the film does strengthen as it goes, it’s a film that needs a lot of forgiveness to buy into its style and story. For those willing to give in to its over-the-top elements, it’s a decent killer thriller with a third act that helps punch through some of its more mundane scripting aspects.

Although there are certainly gothic elements at play in some of its choices, particularly with how it toys with the possibility that there is a fantastical element to its plot for small spats in the second act, The Third Eye remains much more indebted to its Hitchcockian thriller aspects than it does to Corman or the Universal horror films from the decades prior. Mino, played a bit too overzealously by Franco Nero, is caught in a whirlwind of jealousy when his mother and housekeeper become enraged with his love for his fiancée, the always solid Erika Blanc. Murders and other conniving events occur. Soon, Mino begins to lose his own grip on reality which pits him into a flurry of derangement when his fiancée’s sister, also played by Erika Blanc arrives at the home.


Naturally, the film bides its time developing the relationships of the various people around the home for most of its first half. It’s unfortunately burdened by its melodramatic style of dialogue and the romantic love “triangle” that develops which feels borderline comedic at times, despite some solid efforts at establishing a building tension by director Mino Guerrini. It also doesn’t help that the film is legitimately attempting to take many of the pieces of Hitchcock’s Psycho and put a sly Italian twist on them which only works to a limited extent.

Granted, as its various twists and turns are unveiled, the film does earn some merit for just being odd enough to hook its viewer. Its biggest obstacle is getting an audience to buy into Mino’s descent into madness when, let’s be honest, he was a pretty strange duck to begin with. It helps that Nero and Blanc anchor the film impeccably well simply with their screen presence. Even the black and white cinematography can’t escape the piercing eyes of Nero, but he’s occasionally putting a bit too much cheese in with the rest of the sandwich to find the right balance. 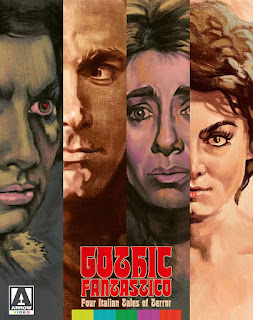 The film stumbles its way into a second half that is justifiably entertaining, but it’s not a smooth stumble as it tries to find its own voice in recreating some of the Psycho beats and character elements. It does, however, have some key moments that stand out. When one character is left bloodied and stranded for dead in a hallway, Guerrini is savvy enough to make her plight to reach a phone one that’s an excruciatingly long and tense journey. It’s a simple sequence made highly effective by its pacing, performance, and breath-holding tension. If only more of The Third Eye could have replicated that balance.

Still, for fans of Italian cinema, The Third Eye is just interesting enough to pull a recommendation. If anything, it’s to see an early film for both Nero and Blanc more than anything else and the Hitchcockian riffs are a bit of icing for those looking to see how the film handles its bolder maneuvers of narrative. It’s full of its own nice old-school thriller atmosphere, but its troublesome start and melodramatic streaks undermine some of its better qualities.