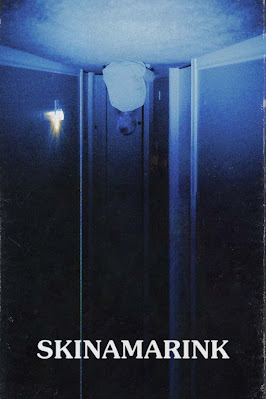 When a film leaks online, it often spells for sabotaged release schedules, loss of money, and a skewed marketing campaign. Working on the fringes of the industry, I’ve seen it capsize some films - particularly independent ones. Yet, there’s always the anomaly where this kind of piracy oddly benefits the film. Skinamarink, coming to y’all from genre stalwarts IFC Midnight and Shudder, is one that seemingly took a massive technical error that leaked the film online and turned itself into an internet urban legend.

The combination of mixed word of mouth from its film festival appearances about its suffocatingly lo-fi style and unnerving tone and a sudden burst of interest in social media sites like TikTok and Twitter, made it the must-see horror film of the moment. Skinamarink was apt to join the likes of films like Blair Witch Project and Paranormal Activity as an indie film catching mainstream attention for its scare factor.

Although the film is certain to be one of the most divisive films of the year for its choices, it’s understandable why the internet became incredibly latched onto it. Skinamarink is superficially similar to Creepypasta or other experimental horror films that have littered the video services online for the last ten years. It’s toying with the audience’s sense of reality, blending a dreamlike - or more nightmare-like - tonality with abrasive home-videos-from-hell visuals, and it features some distorted and unnerving imagery that is apt to capture the attention of its viewers.

In a way, Skinamarink is perhaps best experienced as something that is stumbled upon, late at night from a mysterious post via Reddit that states “Is this real? What is this? Are the kids okay?” Thus, it makes sense that this would go infectiously viral online by people discovering it this way.

However, Skinamarink is also a film that pushes beyond the normal online fervor with its creative choices. It's very specifically not aiming to be a mainstream consumable product. In fact, one could argue that director/writer/editor Kyle Edward Ball is intentionally making the entire thing not like a traditional movie experience at all. One never (really) sees the faces of its characters as the film is mostly from a POV style perspective, which further embraces its nightmarish quality, and most of the dialogue is muffled whispers bolstered by sporadic use of subtitles while the film is scored only by old cartoons that are continuously playing on the living room TV.


That doesn’t even begin to analyze how Ball and his very small crew manage to make the grain of the “film” manipulate the audience’s interpretation of shadows, walls, or other mundane spaces of a house during a perpetual night. The long static shots of normal things begin to take on their own malevolent nature throughout the run time so that when things begin to look and feel…unnormal, it’s even further distressing. Just the idea of a house where the doors and windows mysteriously disappear (or the fuckin’ toilet for that matter) is skin-crawling enough, but add to it that the kids’ toys start to appear adhered to the walls and ceilings and suddenly Skinamarink has gone from weird to full on anxiety-inducing in its sense of ‘wrongness.’

While the visuals and tonality spell out S.U.F.F.O.C.A.T.I.N.G. D.R.E.A.D. in more ways than one, it’s a film that so loosely plays with its narrative and story that it’s likely to piss off a large portion of its audience. Reading some of the comments already about how Skinamarink is utterly boring or far too long are just the other edge of the double-edged sword of its intentions. This film is so dedicated to its dreaminess of narrative that it never puts any of the pieces of its plot or characters together for its audience. Yes, we have two little kids, Kevin and Kaylee who seemingly are trying to survive a night (or 500 nights) in a haunted house, but nothing ever seems that simple. 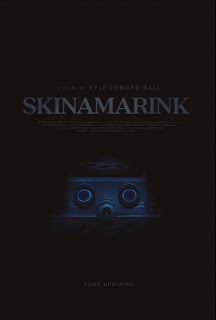 It’s like watching a ‘crime scene’ that takes place in the present, future, and past where the audience is only given these little bits of the story to figure out what happened. The approach will be massively frustrating for some, but for others - like myself - trying to fill the gaps and understand what happened or is happening is the reason the film works. Is it a nightmare about a child’s view of domestic violence? Is it really a haunted house that distorts reality? Is it hell? All are viable options (although my interpretation is that it’s focused on the horrors of child abuse, but I can hardly claim that to be definitive - that’s just my read on it) and its interpretation is part of its own demonic schemes.

Skinamarink is not an easy film to love, nor enjoy wholly if I’m being honest, simply for the fact that it never gives the audience what they so desperately want - a consumable horror product. Yet, in that approach, Kyle Edward Ball and his team manage to pull off perhaps one of the most fascinating horror films of the new millennium. Did I fully understand Skinamarink? Absolutely not. Did this film ratchet up my anxiety levels to 200 by the time I left the theater? Yes, yes, it did. And, if that was the goal in creating a cinematic equivalent to the fears of our childhood, pressed into the grains of a home video, with no logic or no sense of the boundaries of reality... then the mission was accomplished.

Now, if I could only figure out a way to get some sleep now.