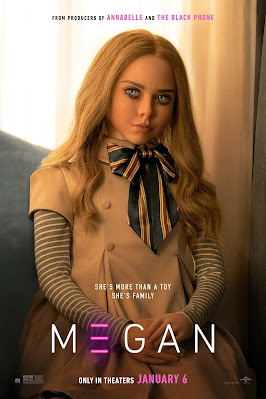 An uncanny valley is a fascinating place to be. With the right expectations, a cinematic audience can embrace it and enjoy it for what it is - the horrifying and occasionally humorous place. When it does not work, it’s truly one of the most confusing things to witness. This was the tightrope that M3gan was aiming to walk. Uncanny enough to be memorable, but not enough to lose its audience. While the overall critical reception of the film at this time has been shockingly positive, M3gan is a film that sincerely relies on its audience to be laughing within minutes to set up the expectation for its journey to the uncanny valley.

To be honest, the tightrope that M3gan is walking is one between intentional comedy, intentional horror, and both of those things falling into an unintentional abyss of both. In that first handful of minutes, director Gerard Johnstone - mostly known for delivering a great horror comedy back in 2014 in  Housebound, is trying to set up those expectations. We are treated to a dark, but a generally silly commercial for knock-off Furby (remember those?) that is built into the internet. Then we launch into the inciting event of the film, a family arguing and then being pummeled by a snow plow.

See, audience? We got some laughs, we got some tragedy. That’s how dark comedy works, right?


This is the epitome of where M3gan struggles. Finding that balance. The first half is very much keyed in on its comedic beats, piling on plenty of those tropes like the annoying neighbor or the hardass boss - played by Ronny Chieng doing his normal thing. Even the supporting co-worker friend group for our lead character, Gemma, features that “one” guy who just spouts off things like “Are we really going to do this” and “I’m trying not to tear it” when he’s trying to pull off the synthetic skin of a little robot girl. It’s really not nearly as dark in its humor as I was expecting, outside of a few moments. And, frankly, those darker humor moments completely went over the heads of my theatrical audience - despite the fact they were laughing at every soft joke tossed their way.

In this first half, M3gan is juxtaposing the silly humor against its humanistic side of a career-focused aunt Gemma, played by Allison Williams, trying to find time in her life to connect and help her niece, Cady, the lone survivor of the family that met the plow in the intro. Despite some decent performances from both young ladies, with a note to McGraw as Cady who continually holds her own in some very lofty genre projects, the stock characters for protagonists don’t inherently do the film any real favors. Easy to understand, perhaps, but not characters that immediately jump off the screen as the dynamic duo meant to take on their new prototype doll that goes “off-grid” in morality. M3gan, as a character, is the expected stand out here, from her design to her performance from both the physical and verbal side. Once she enters the picture, and particularly once she goes 3V1L, she steals the show and the horror aspects of its premise start to pop through the comedic and dramatic bits.

Once the horror (finally) arrives, starting at about the halfway point, the film finds more of its rhythm, establishing a better balance and embracing the obvious influences of Dan Mancini of Child’s Play/Chucky fame. Still, it becomes rather apparent that the horror of the film is aimed at a younger audience or at least a more causal horror one. There are a few legitimately creepy sequences in hand, particularly due to the rather impressive vocal and physical performance of the two girls within the clever design of M3gan, but it is not a film aiming to embrace the horror fully. The forest chase is one that stands out for its slightly more unique setting and brutal moment in the end, but most of the horror elements do feel undercut to a certain extent. 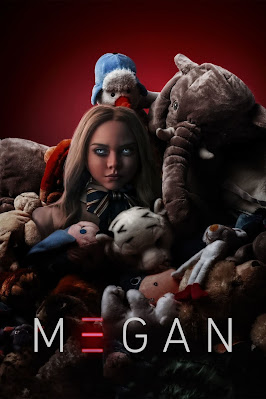 The biggest missed opportunity of the film is that it rarely pushes its thematic or science fiction questions to the front of its narrative. The fact that M3gan, as a character, learns from the internet is one that could easily have been mined for motivation, humor, and horror. Lest we forgetMicrosoft’s AI becoming problematic within 24 hours back in 2016. The film is far less interested in exploring these ideas as it is in just giving M3gan malevolent and chuckle-worthy lines of dialogue to combat the human protagonists. M3gan is, simply put, far more Chopping Mall than even I, Robot in its depiction of killer robots. Take that for what it’s worth.

In debating the balance between humor and horror (a combination that works less in execution than one would hope, even outside of this film), it should be noted that M3gan still manages some unnerving sequences, a few punchy jokes, and delivers a great villain for the (soon to be coming) franchise. It’s just funny enough, just spooky enough, and just charming enough to pull that off. It is a jack of all trades, master of none kind of flick. And it is smart enough to know how to pull off those one or two moments that will be meme’d for eternity.

In the end, M3gan is hardly the next-level horror or comedy flick that many might be expecting. It’s aggressively fine in its scripting with plenty of characters that just rest on their tropes and deliver decent performances. It’s easily carried by the villain, her design, and a director that knows exactly the power she has once she (finally) starts her quest for blood. Take it as you will and, in reference to where this article started, don’t go in with super high expectations in navigating its uncanny valleys.

Fortunately, if the sequel is greenlit, this franchise does have a lot of great places to explore now that it’s gotten its origin story out of the way.