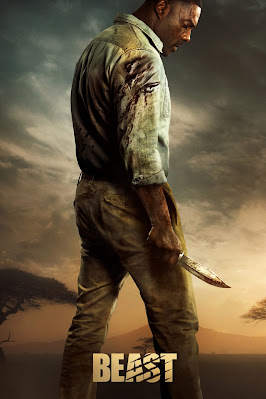 After watching the initial trailer for Beast, I immediately told my significant other “we have to see this film.” I pulled out my phone and purchased tickets. She looked at me perplexingly. “Babe, Idris Elba punches a goddamn lion!” I proclaimed. It’s not often that silly action thrillers find their way to theaters anymore. With the relative death of mid-tier cinema that aims for a specific demographic rather than the four-quadrant blockbuster, a film like Beast would normally be poached off to the highest bidder in streaming. Beast could have easily been the next Amazon Prime, Netflix, or (shudder) Peacock exclusive.

It is a relative blessing that Universal did not seemingly pitch Beast to that market. Even though this 90-minute nature run amok is just that - with the bonus of having Idris Elba playing a sad dad thrust into a life-or-death situation for him to prove that he’s not fuckin’ around when it comes to his daughters’ safety, Beast is the kind of B-movie elevated to cinematic A-level experience that benefited wholly from its theatrical experience. Not to mention, it also manages to fulfill its marketing destiny by having Elba punch its titular killer repeatedly in the head.

Making Beast work is accomplished by understanding the tropes of the nature-gone-foul survival action horror thriller concept and then executing it in a manner that elevates the material. Yes, the themes around a dad/lion protecting his family/pride in the face of threats like lions/poachers is not one that is going to confuse a more general movie-watching audience, but the film is approached with a seriousness that it’s able to manage uplifting everything.

The script is tight, with no filler and all killer character development and pacing throughout. Although it does lean heavily into the sad dad tropes around family abandonment guilt and the dangers of poaching in Africa for character beats and plot development respectfully, there is a ‘less is more’ approach that keeps Beast moving in a way that supports its well-oiled approach to thrills and spills. Idris Elba is the one that gets to play around the most with his character, but it is notable that both Leah Jeffries and Iyana Halley are playing off his work with admirable charisma to keep the energy level up throughout its run. Copley comes in to do his usual thing as the old friend, but the film smartly uses his character and sidelines him in a way that comes off as both predictable and effective. It is not all that original as it smoothly weaves its way through the formula, but it’s also impressively fluid in getting through it without pandering or becoming trite.


It helps that director Baltasar Kormákur, the man who brought us the infinitely watchable and entertaining 2 Guns, handles the material with the utmost confidence that he can add more than a level of interest to the proceedings. He thrusts the camera into the dynamics of the family and set in a way that makes the audience feel like they are walking along with the characters through the heated African landscape. Long takes and limited editing as the characters explore a ravaged village or abandoned poacher fort drop the audience into the tension of being lost or experiencing the events in “real-time.” It also allows Beast to toy with its audience by teasing places or angles that the vicious rogue lion, the titular animal stalking our protagonists as revenge for the loss of his pride. Many sequences, including the cold open or the various attacks throughout the second and third act, are shot like a slasher horror flick and it works stupidly well in building the tension and thrills as the lion comes at our family like a big cat version of Jason Vorhees.

Beast might be a film that many individuals wait to watch on streaming because it lacks the spectacle of more traditional blockbusters, but do not sleep on it. It’s cinematic enough that it works very well in a theatrical setting (particularly its CGI lion which may not translate to home video as well later) and the film is a brisk watch that never overstays its welcome. It has some great performances and a strong sense of direction that elevate its quick-paced script into one of the sleeper cinematic successes of the year. If anything, the film is worth taking a swipe at if you get the chance.