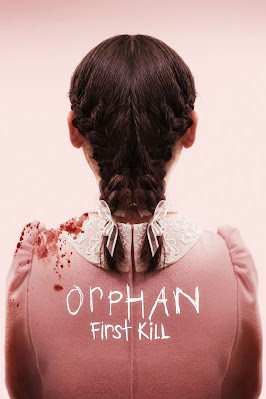 When the shockingly effective and fun horror flick Orphan didn’t get a sequel greenlit, the chances of seeing the conniving killer, Ester, get a franchise seemed like more and more of a long shot. As the titular killer kid, Isabelle Fuhrman was not getting younger and the story and character required a young-looking antagonist to drive it home so as the years passed, the rumors of a franchise seemed to dwindle. Yet, as those years passed, Orphan only garnered a more die-hard fan base, including myself and my own 4.5/5 blood drop review HERE, and the fans clamored for more - no matter what.

Perhaps this is what led Paramount to purchase the rights to the franchise from Warner Bros, to begin with, but what really surprises with this long-awaited new entry, titled Orphan: First Kill, is that the announced film was not a reboot. It would continue the story of Ester, in all her horrific pigtailed glory, and Isabelle Fuhrman would be back in the role. To make matters more complicated, not only would it be a now 25-year-old in the role, but it would also be a prequel to the original.

As if the twist of the original wasn’t batshit crazy enough, the path this franchise was taking seemed just as insane.

Yet, here we are with Orphan: First Kill, and not only is this prequel a success, but it’s also shockingly effective at replicating the B-movie madness of its originator. It’s such a fun and delightfully twisted flick, leaning even further into its silliness as a story, that fans of the original will consume it gleefully. Ester is back to deliver the same fun, but she’s doing it in some all-new ways.

Granted, the silliness of its premise does require me to spoil the twist of Orphan somewhat, so if you are still unfamiliar with that late 00s gem, you may just want to take my advice and go watch that and this prequel now. They both still hold up as punchy delirium in cinematic form. Go ahead and skip the rest of this review.


With that being said, the idea that a now 25-year-old actress would be playing a 30-year-old woman who looks and disguises herself as a 10-year-old is still as insane as one would think. Isabelle Fuhrman remains a delight in the role though and director William Brent Bell makes some admirable reaches to pull off the visuals (the behind-the-scenes pictures of everyone in giant shoes and giant sets) to make it all work. It’s not always the best, but a large part of me is far more excited to see them do the effect in camera rather than in post with CGI. So it’s easy to forgive First Kill for some of its hiccups based on its practical approach and another great turn by Fuhrman.

Once an audience is able to buy into that initial leap of mental gymnastics around Fuhrman, First Kill sets its sites on trying to ride the line between giving the audience what they loved about the original and trying something slightly new. After a cold open that sees Fuhrman escape the psychiatric institution and delivers an initial strong body count to firmly establish the series as more slasher and less mystery flick, First Kill proceeds to move into familiar territory. It’s almost eye-rolling in how it recreates so many of the same elements as Ester pretends to be a kidnapped missing kid for a rich family and starts her chaotic games, toying with the family and starting to lay a honey trap for the dad. Creepy, yes, it still is, but certainly redundant.

Of course, leave it to an Orphan film to be like “By the way, this film is a bit crazier than you expected.” By the second act, the film takes a solid spin with its characters and plot. It’s glorious. It allows both Julia Stiles and Matthew Finlan to play with the size of their characters and changes the entire dynamic of how the film is going to play out. It is as if the writers and director William Brent Bell knew that by playing up the same beats, they would be able to fake out their audience and it works like a fuckin’ charm. 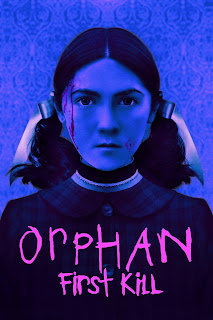 Quite frankly, William Brent Bell is a director that has been more misfire than hit with his career, yet there is a sense he brings to First Kill that is both B-movie and one that capitalizes on those elements by playing the expectation. He managed something similar with The Boy (and lost the plot, characters, map, and entire sense of logic with its sequel) but he pops with this one despite the film’s limited budget and made-for-TV visual look.

Orphan: First Kill is a film that knows what it is, knows why the original one was a surprisingly effective horror film, and then plays on all of that in some fun and creative ways. How far its tongue-in-cheek elements and silly premise will travel may vary with its audience, but it’s such an entertaining slice of horror franchise work it’s hard not to love on some level. Sure, some of the acting in its secondary roles can be a bit hammy, the visuals look a bit Lifetime-esque, and the film leans far more into horror now that the mystery of the original is spoiled, but it uses all of it to add to its tone.

Orphan: First Kill might be one of the big surprises of the year and I can’t wait for this franchise to continue.