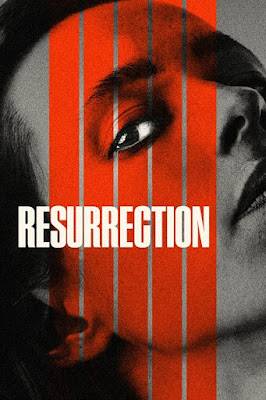 At this point, is there any performer in cinema that exemplifies the horrors of trauma seeping to the surface of one’s cracking psyche like Rebecca Hall? It was only last year that Hall partnered up with horror maestro David Bruckner for the supernatural holds of depression and ripples of suicide in The Night House. That was a film that lingered with me for months afterward in a way that tickled the membrane under my skin.

When Resurrection was announced, bringing Hall back to tackle another round about the effects of a problematic relationship that unravels in the wake of its demise, naturally, the film was immediately put onto the viewing queue.  You should too. Resurrection, despite its bland title and an overall synopsis that feels more mundane than it is, marks another descent into a psychological terror that is worthy of discussion and dissection. A blend of classic themes around “are they are they not insane” with sharp writing that benefits the strength of its cast, Resurrection is a film seething in its own frames and will leave its audience doing the same.

It is difficult to not simply give Rebecca Hall all of the credit for the success of Resurrection. As noted above, she’s the kind of acting powerhouse that all atmospheric and character-driven genre cinema aims to use. Naturally, she gets to strut out the award-winning moments in the film, including whiplash-inducing changes of emotional presence in the more tense and horrific moments, but it’s her ability to showcase the “work” that people do in holding back those kinds of emotional outbursts that defines what Resurrection is doing on a character and thematic level.

When the film eventually adds in Tim Roth, a dynamic and enigmatic actor in his own right, as the film’s main antagonist, Resurrection is able to give Hall a screen presence and effective counter to build on her own work.


One monologue, delivered in a staggering one-take moment that never leaves Hall’s face, exposits all of the information necessary for the rest of the film to work. It is the kind of clip shown at the Oscars telecast. She is not only able to navigate the complexity of her character, but she is able to embody all the themes in a way that never feels expository or self-indulgent. It’s the kind of work that uplift the quality of an entire film.

Naturally, there is a strong script underneath it all too. An artistic hand from writer/director Andrew Semans creates a meticulous narrative and tone that Hall can feed into both thematically and stylistically. Resurrection is a film that is a slave to its own details, even when intentionally left vague or up for interpretation by its audience, and it’s impactful in its small moments. The questions it asks around control, or the loss of it, regarding trauma, love, and family are often left lingering in the air and it will either frustrate the living hell out of the viewer or delight them. As the film increasingly becomes more extreme in its manic paranoia eventually leading to a shock-to-the-system finale, I found myself delighting in its often-horrifying questions in a way that left me unnerved. This is the kind of postmodern punch that horror is brilliantly effective at delivering.

Resurrection is one of those atmospheric and darkly dramatic films that plays in the horror landscape but will be far more divisive than it should be due to its heavy pacing and loose narrative that toys with the audience as much as it does with Hall’s protagonist. It’s intentional vagueness in its themes and character beats, which leaves a lot of questions by the time the credits roll, is distinctive in its flavor and it’s not one that more casual viewers may find as deliciously anxious as I did. However, Resurrection is not to be missed for its incredible performances and a final act that goes admirably off the rails without losing sight of its purpose.