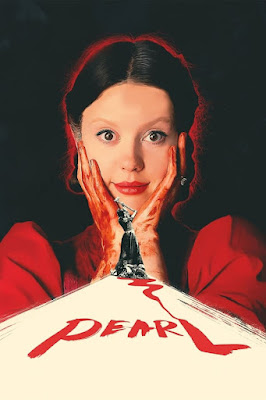 When Ti West dropped his A24 neo-retro-slasher (is that a thing?) X earlier this year, it took the horror community by surprise. Love it or hate it, West delivered a slasher that used its retro 70s exploitation style to chat a bit about the genre in a way that made a splash in the community.

The real twist of the film was that West, actress Mia Goth, and studio A24 managed to simultaneously film a prequel about one of the film’s villains. Pearl, named after the villainess at the center of the film, is inherently tied to X in most of its themes but serves as a character study about the birth of a killer ala American Psycho or Henry: Portrait of a Serial Killer. In a bold maneuver, A24 attached the teaser trailer to the end of X. Surprise! This is already a franchise.

Reportedly, West and Goth had worked out this character story together during the process of filming X. Yet, on paper, Pearl achingly feels like an exercise in extensive character backstory writing, but one that is both empowered and hindered by that intention. As viewers of its predecessor, where can the film go that will hook us? The answer that Pearl presents is a story that is far more character focused than plot focused. Is the story going to drive the film? Absolutely not. Is the character going to drive it? Absolutely.

Granted, the themes around Pearl’s struggle to find herself are interesting enough to carry the film. Her fight against the constraints of a 1917 setting, the lingering effects of the Spanish Influenza, a husband serving in Europe during World War I, and a growing realization that her only way of escaping might be killing those who hold her back make for an intriguing story at its foundations. It’s not quite the previously mentioned Henry: Portrait of a Serial Killer or American Psycho, but in terms of a villain origin story, Pearl pulls off the basics well enough to work as a disturbing character tragedy more than anything else.


Most of the strength of Pearl as a cinematic feat must be laid at the feet of Mia Goth. While Ti West is certainly bringing in some pizzazz with visuals like some split screen, the technicolor-inspired color schemes of 1950s movies, and fun edits, it’s the performance from Goth that truly carries this film as far as it can go. Between subtle introspective moments and primal screams of rebellion against the world around her, Goth is firing on all cylinders with this role and utterly devours the screen every second she’s on (and a few times she isn’t). Just her performance on a held shot of her face throughout the credits leaves a haunting and tragic echo after the fact. Horror never gets award buzz, but if they were to start this year – it needs to go to Goth.

Yet, despite its fun visuals, which don’t quite go as far as the recreation of a bygone era like The Love Witch, but serves as a love letter to it, and a phenomenal performance that could crack the earth when needed, Pearl is a film that ultimately felt distant for me. There is a sense of artifice to so much of it, in tune with its character as someone who is desperate to leave the real world for the fantasy one of the movies she watches at the local cinema, but it also leaves a cold chill in the air around its story. Perhaps that’s the intent. That the artifice, the distance between characters that don’t quite feel real and its very real emotional outbursts from that disconnect, is the film simply putting its audience in her shoes. Which, if so, means that Pearl is a raving success. If not, then it’s a film that is unable to bridge the gaps between its visual, tonal, and character choices. It’s artistic, but it’s challenging. 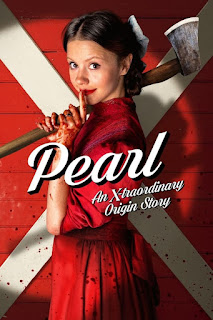 The overall narrative has a bit of a meandering pace to it at times too. While it does allow it to deliver on some incredible moments, including a dance audition that intentionally and delightfully creates some bold visuals while delivering some serious whiplash, it’s not the tightest in terms of pulling off cohesion. At least, not to the extent that X was able to meld plot, characters, themes, style, and horror thrills.

Still, Pearl is a film that manages to do some fascinating things despite its limited budget, time frame, and speed of filming. It’s a film that has already grown on me in the days after seeing it in concept, but it’s not West’s most proficient effort in balancing all the elements. However, it’s those moments, powered by a career defining tour de force performance by Mia Goth that makes this film such a strange and punchy watch. Pearl is colorful, odd, and often unnerving, taking an early film aesthetic and then blending Herschell Gordon Lewis style elements with modern villain origin story character writing. If that tickles your fancy, then it’s not hard to recommend this surprise prequel.