Off with Their Heads!: Flying Guillotine, Part II (1978) Updated Review 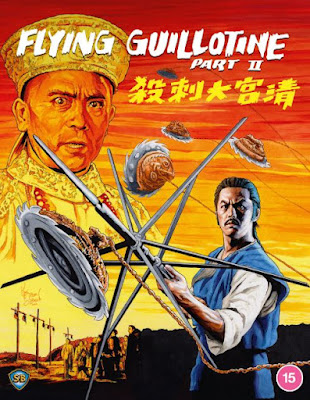 It’s been almost a decade since I watched Flying Guillotine, Part II for Blood Brothers (at the time in the US it was released via Dragon Dynasty as Flying Guillotine 2 and you can read my review of the film HERE) and it was a film that didn’t really come off its chain spinning and slicing as I wanted.

Yet, when 88 Films announced the film as one of the final Shaw Brothers flicks that would be released on Blu-Ray in both the US and the UK, it was hard not to reassess where I stood with the film. Would it take my head off with its sharp edges or would I continue to find its weaponry rejected by an extended anti-flying guillotine broken umbrella staff? Yeah, that comparison between the weapons and my feelings towards the film was a reach, but this movie kind of deserves it.

As simple as it is, during this recent viewing, the strengths of Flying Guillotine, Part II became more apparent while its flaws became more perplexing. To add to that, I rewatched the original Flying Guillotine (a UK Blu-Ray exclusive from 88 Films) prior to this one. The dissonance between the two seemed larger. Not that this sequel doesn’t have its merits, but it makes some baffling choices throughout to be both a oddity as a sequel and as a film on its own.

Ultimately, while my feelings still sit in cohesion with my original review, this recent rewatch made it apparent that two things do stand out as bright spots in this over bloated follow up.

The first is Shih Szu as Na Lan, the “second” protagonist from the group of rebels, who is low key the real protagonist when the film decides it makes sense to bench Ti Lung’s Ma Tang for most of the film. She not only handles the material like a champion, but her character is far more interesting than what the script has in store for Ma Tang. The family dynamic and the building of the female team of Flying Guillotines is worthy of a film itself. It’s just unfortunate that Flying Guillotine, Part II proceeds to try and jam in too many other plots to give it the time to develop. When someone is popping as much as Shih Szu, the film would have done wonders to run with her instead.


The second piece is the frantic and offbeat camera work. The great thing about this film is that directors Cheng Kang and Hua Shan are desperately trying to add energy into the massive amount of small room dialogue and mishandled scope by just whipping the camera around like it’s an early Tsui Hark film. Most of it feels like it’s unnecessary visual fluff, but the choice does add a level of entertainment that matches the seething craziness of the villain and makes for a fun watch when the plot starts to weigh down the narrative. The choice in camera work was noticeable before and on this rewatch it was a whirlwind choice that makes the movie work at times.

Other than that, Flying Guillotine, Part II is a fairly mid-tier Shaw Brothers venture. The biggest hurdle it tries to clear is how much story and character work it wants to add in to make the tale more epic. Unfortunately, despite a great cast, fun visuals, and strong ideas, it never gets it to gel. Fortunately, the new Blu Ray release from 88 Films makes this film a worthy addition to the collection as the film looks stunning and the new commentary featuring Mike Leeder, Arne Venema, and Michael Worth is just as entertaining as the film.

Flying Guillotine, Part II isn’t the classic of its original nor is it as silly entertaining as some of the other knock offs (looking at you Dragon Missile), but it has some great aspects that fans will appreciate.