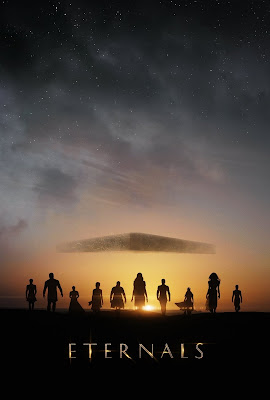 Disney and Marvel have always been very particular with how they expand the Marvel Cinematic Universe. The introduction of mysticism was in a wholly generic and formulaic origin film with Doctor Strange, the leap with Thor into the cosmos happens mostly on Earth, and the introduction of the multi-verse took two entire Avengers films to pull off. The latter is a choice that will now seemingly dominate the entirety of the franchise for the foreseeable future and allow for MCU to exist until mankind burns to the ground.

For Eternals, a full-on expansion of the MCU into epic cosmos insanity, Marvel and Academy Award-winning director Chloe Zhao attempt to ride that fine balance once again by introducing an entire new squad of Space Avengers. They are not the Guardians, for the record, but they do ask the hard questions to each other like “who will lead the Avengers now?” to make sure we don’t forget the film is part of the franchise, I guess. These Eternals have been patiently waiting on Earth to receive the call from Space Dad, a six-eyed stone-looking red space god named Arishem, to go back home. Naturally, not all is what it seems and the Eternals’ natural enemy, animal-like bundles of tendrils named Deviants, arise on Earth once more as a pending disaster looms on the horizon.

Tonally, there is a lot of fascinating choices being fed to the audience with Eternals. Granted, most of these choices are at odds with other choices, but a large part of me has a lot of respect for this film for attempting to try something refreshing with this 26th entry into the franchise. Bringing in Chloe Zhao to write and direct the film, a director known for her films that are artsy and grounded, to work on one of the loftiest and ungrounded films of the series works much better on paper than it does in action.

What results is a film of a mixed tonality. For every 20 minutes of philosophical rumination of the Eternals posing in earthy landscapes about the darkness and light within all of humanity, there are 15 minutes of generic and oddly paced CGI-riddled battles. It’s a push n’ pull feel that becomes rather repetitive as the film starts reaching well beyond the two-hour mark. Zhao must have sincerely enjoyed exploring the entire Highlander emotional weight within the ensemble of main characters, so it’s a shame that Eternals is trying so hard to stuff so much material into what boils down to another standard Marvel plot on its bare bones.

Yet, it’s hard to argue that Eternals doesn’t have its merits in exploring its characters. Their existence as some of the most powerful beings in creation adds a lot of huge questions to the mix that this film is wholly intent on not answering, least of which is how they are able to stay hidden with other powerful heroes like Captain Marvel that exist but I digress. That’s not what Eternals wants to explore and any of those plot holes are brushed over.

Once the film establishes its immense amount of exposition to set up its concept, the Eternals - lead by audience surrogate Sersi played by Gemma Chan and a Not Superman in Ikaris played by Richard Madden, aim to get the band back together to face the new threat. The ten (yes, as in double digits) characters that comprise the Eternals are incredibly well cast and effective when they are on screen with one another. The overall dour tone of the film tends to undercut some of the fun, but with a stacked cast like this - it’s hard not to give them the benefit of the doubt. Eternals struggles as a film to balance all ten characters once they are together and tries to keep the little sects separated throughout. It even goes as far as kicking one character from the film for the final act. Where’s Kingo played by the comedic relief of the film, Kumail Nanjiani? He peaced out. He didn’t need to be involved in that final fight, I guess.


While Sersi and Ikaris are the “leads” of the film, at least in a traditional sense, most of the secondary characters throughout steal the film right from under them. Those two can debate all they want about how best to interact with humanity while the best parts of Eternals are centered on those smaller interactions when the crew is not fully teamed together anyway. My money goes to Ma Dong-seok (credited as Don Lee) as Gilgamesh and Angelina Jolie as Thena as the true MVPs of the film. Their time together on-screen highlights everything great about Eternals and if they decided to make a new Disney+ show with them performing home improvements and cooking for guests, I’d watch that in a heartbeat.

Unfortunately, for all of the time spent building up the heroes and their dynamics, Eternals just feels messy. The action is too sporadic and repetitive, the lack of a true villain until the final act pulls away from the sense of urgency to the plot, and the tonal shifts tend to feel too jarring. However, even if it’s one of the most incohesive films of the MCU, Eternals does add an intriguing and elevated gravitas to the franchise that has been sorely missing and the potential for its incredible cast for the future cannot be ignored. The film has a massive amount of heart to its characters too. So much so, that when it works, I was totally sucked into the proceedings and may have cried a couple of times. I mean, it was a dusty theater. What can I say?

Say what you will about the Marvel Formula, but it works to maximize impact for the greatest amount of viewers across the world and it takes a slight misfire like Eternals to notice just how consumable and effective it is. There is a lot to love in this latest film, but a lot of it is in direct contrast to that formula and the strain is incredibly evident.

And with that being said, I’m completely game to see more Eternals and I love that Zhao and producer Feige were championing to try something slightly new for the series. The final product might be problematic, but for that - it deserves some respect too.