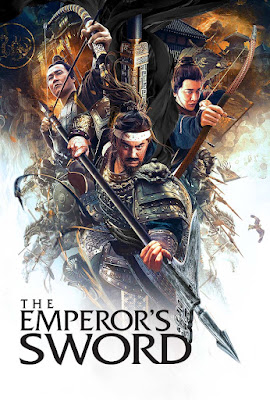 The pandemic changed a lot of things in the film industry. At this point, discussion about the box office and the explosive expansion of streaming services are well-known discussion topics. To be fully honest, I’m a bit tired of talking about the birth of streaming, the death of ‘cinema’, and whether or not films that are released straight to a streaming service count as TV movies or Movie movies. I can only get into so many fights on social media before it ceases to be interesting. Let’s not forget though, that this change is happening all over the world.

Case in point, The Emperor’s Sword was released to the Chinese streaming service Youku was picked up for distribution in the US via Well Go USA where it received its premiere on their streaming services, Hi Yah, before receiving a full-fledged Blu Ray release. It’s not the first film of this ilk to receive this kind of treatment and, yes, there is a cheaper look to the film and budgetary restraints that tend to limit the film’s tonality and approach, but The Emperor’s Sword is a much better film than expected. Perhaps I was just craving a newer wuxia film that doesn’t bombard its audience with bullshit CGI monsters and wanna-be Hollywood blockbuster spectacle, but there is a simplicity and classic tone to the core of this flick that hit me just right.

The Emperor’s Sword does start off stumbling out of the gates. The opening sequence explains the history of the titular sword and a bit of history regarding seven martial heroes and some political intrigue about how the sword will be needed post-coup. A shoddy CGI riddled battle sequence certainly doesn’t bode well to set the tone and the manner it spews exposition through voice-over feels like the film is already cutting corners to get the film on track.

To add a perplexing component to that opening is that, as soon as the main plot starts with a young woman tasked with getting part of The Emperor’s Sword from point A to point B, none of that exposition or the battle sequence was needed. The film immediately throws down into a ‘chase film’ structure and it leans heavily into the classic lightning pacing of old school 1960s Shaw Brothers wuxia films. In this choice, the film revolves around a lot of secondary characters that pop up to help out the young woman on the run, but the quick pace and gimmicky side characters add a bit of fun to the mixture. The overall balance between more serious human emotional moments and the fun of its action-packed wuxia concept is not always in sync, but it’s admirable and smart considering its limited budget.


The budget of The Emperor’s Sword is certainly its biggest obstacle. There are some fun sets and costume designs at play here, but there is a cheap look to all of it that requires quite of bit of suspension of disbelief for its audience to buy into. The performances are wildly hit or miss from role to role, despite a couple of solid casting choices with Fengbin Mu and Qiyu Yang, but the film uses the characters in ways that don’t necessarily need them to carry the weight of its narrative outside of a few key scenes in the latter half. Again, despite some of its difficulties, co-directors Yingli Zhang and Haonan Chen work around them in some clever ways that limit potential rerailing issues.

As for the action set pieces, this is where The Emperor’s Sword is attempting to do its most stylish and bold moves. With its first non-battlefield fight sequence, the film throws down its first foray into its style which is meant to showcase the no-cut, sweeping camera motions that move throughout the sequence, zooming in on characters and sliding between regular speed and slow motion. It’s a strange combination of the church sequence from Kingsmen and some of the battle sequences of 300. It’s not as executed as well as one would want, thanks to some shaky use of CGI and some odd pacing choices. Still, there are a few key times in the film where it works to add some tension, including a standoff moment in an inn between hidden heroes and a villainous hunting party.

Quite frankly, for a film that was made for streaming, The Emperor’s Sword is still an entertaining and shockingly fun old-school wuxia flick. It attempts to add in just enough style and substance to its throwback chase-focused plot to carry itself. It’s not the most balanced film and its limited budget and mixed range of performances will certainly make a few martial arts fans check out, but considering the context of the film - The Emperor’s Sword makes some impressive cuts.