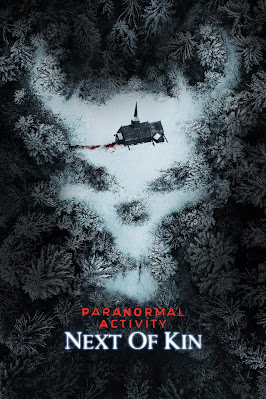 Paranormal Activity is back. It’s a franchise that has always held a special place for me that was fascinatingly created almost completely in retroactive continuity between entries. In fact, just this October the Blood Brothers cousin podcast, No Franchise Fatigue, spent three entire episodes digging through the films of the series. You can listen to those episodes at the following links: Episode 1, Episode 2, Episode 3. Nonetheless, it’s a series that is far more interesting as a whole than people usually give it credit for even when the quality of individual films waivers immensely.

However, after an unmemorable and misguided “finale” to the Katie and Kristi Meet Tobi the Demon saga of the first six entries, Paranormal Activity was in desperate need of an injection of life. After six years, the seventh entry, under the title Paranormal Activity: Next of Kin, has been uploaded to the streaming service Paramount+ for our enjoyment. The latest entry represents an interesting shift in style and an entirely new story as a reboot of the series. It’s ultimately a mixed effort, but it does showcase the potential of the future for the long-running series.

For the latest film in a series that ranks as the seventh-highest box office grossing horror series of all time, it might come as a bit of a surprise that it premiered on Paramount+. However, it generally makes sense. If Paramount is looking to pull subscriptions and viewers, it’s a series with a following and the overall cost of the series has been relatively cheap for low risk to the studio. It’s a shame though too because Next of Kin is perhaps the most cinematic that this series has ever been.

The reason for its more cinematic qualities is that Next of Kin is the child of two incredibly strong voices in modern horror. The first of which is that Christopher Landon returns to the Paranormal Activity fold as a writer. He is hardly new to the series, as he had previously written Paranormal Activity 3, 4, and The Marked Ones - the latter of which he directed.

The overall story is fairly straightforward, as it follows a young woman, Margot, and a small documentary crew that head to a remote Amish community after she discovers that she was born there. There’s a bit of mystery to the community, the threats mount as strange happenings unravel around them, and themes around cult communities that have been a key plot factor for most of the Paranormal Activity franchise pop up.

Next of Kin’s pacing is a bit sluggish from time to time with some formulaic scares, character beats, and red herrings throughout the first two acts. However, the third act - which isn’t revolutionary by any means, is where the spark lights up, shifts for the character work, and plotting kicks in nicely. It leaves the final 20 minutes as the most effective of the film and one of the best in the entire franchise. It’s notable that in the writing there is a sense that Landon doesn’t want to deviate too far from the Paranormal Activity foundations, but it does take some fun spins with it that adds a bit of unique flavor to the mix.


The other voice that elevates Next of Kin is William Eubank. The director has already earned his cult horror membership with Underwater and continues to streak taking on projects that will eventually find their audience with time in this film. It’s his influence that truly sets this film apart from the rest and gives it a far more cinematic quality. This film does not retain that ‘believable’ found footage aspect the series has used thus far and moves it towards a mockumentary style. This allows Eubank to give the film more angles and clearer footage to show the audience, even when some of the angles and edits don’t make sense from a documentary aspect either (the pounding on the table during the dinner with the singing when the crew first arrives on the Amish land is a prime example of this). However, considering how gimmicky the series has always been, this aspect never feels cumbersome. In fact, I found it quite refreshing at times.

The new setting also adds some fun dimensions to the material. There are very few found footage or mockumentary-style horror films that take place in the snow and winter. Eubank and the team make strong use of it visually, particularly in the third act, to create movement and dynamics for the plotting and overall atmosphere of the film. Not to mention the Amish-ish aspect of it all is a clever way to deviate from the look and feel of the previous films while remaining true to its core ideas.

Paranormal Activity: Next of Kin is hardly a brilliant film as it focuses on delivering the usual bevy of creepy atmosphere, generic jump scares, and formulaic narrative beats. It doesn’t stray too far from the roots. However, it does have its fair share of intriguing spins and fun moments to create a new more cinematic tone and direction for the series. If anything, there is a sense that Next of Kin is a bit of an awkward transition for the series, moving it into new pastures but not quite comfortable leaving some of its barren ones behind.