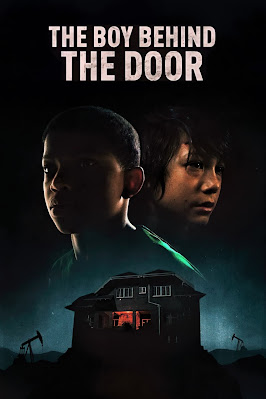 As a father, nothing is more terrifying than all of the horror that can happen to my children. As vigilant as I may be in security, safety, and instilling common sense into my children, there is always the possibility that something truly terrible could happen regardless of my effort or my children's diligence. The Boy Behind the Door is a realization of these greatest fears, as two twelve-year-old boys, Bobby (Lonnie Chavis, This is Us, Magic Camp) and Kevin (Ezra Dewey, Criminal Minds, Teachers) are abducted for nefarious purposes somewhere in rural (redundant) South Dakota. The ensuing game of cat and mouse is a terrifying testament to the dangers that children face in today's world, as well as their resilience in the face of seemingly comprehensive danger.

The scriptwriting and directorial "debut for David Charbonier and Justin Powell packs a potent punch that will leave you clutching the edge of your seat. The Boy Behind the Door is a straightforward story, giving it very little to hide behind. Similar to Crawl (2019, Alexandre Aja) in its cat and mouse nature, The Boy Behind the Door doesn’t rely on gimmicks or sleight of hand to terrify its audience, just pure predatory dread. There are several strengths that make this film a stand-out indie feature from 2020, but I'd like to focus on the clear challenges it overcame to be successful, as well as the clear throwbacks to several horror legends.

Horror is a divisive genre. While there are certainly proponents of small cast and single location horror, they seem to be rare. The mainstream horror crowd is a litany of blood, gore, and a general "more is more" mindset, making understated indie thrillers extra challenging to execute. The Boy Behind the Door crashes through these barriers by mixing the artistry of understated storytelling with some hard-hitting body horror, blending the best of two sides of the genre spectrum into one compelling narrative. The entire cast is limited to eight people, with only 5 getting any significant screen time. Add to that the difficulty of a single locale for the story (with the exception of about 5 minutes) and you've set a tall order for a story to keep an audience engaged for the entire hour and twenty-eight minutes.

Charbonier and Powell accomplish this through excellent framing, visual tonal shifts, and striking cinematography by Julián Estrada. Successful limited location horror films are few and far between, as the flow of a story usually needs a break from the location designated as the "nightmare spot" in order to maintain form throughout the film. Even films that feel as though they could be classified as single location often have moments of respite away from the main location. The Exorcist spans both the house and the college, and Black Christmas cuts away to the college and police station for moments away from the sorority house, giving the audience a moment where they can feel safe away from the host location of the terror. The Boy Behind the Door stands as one of the best single location horror films in recent memory, rivaled only by Alexandre Aja's Oxygen (2021) & Crawl (2019), The Invitation (2015, Karyn Kusama) and Green Room (2015, Jeremy Saulnier) as similarly qualified films in the past ten years. All of these examples demand variety from their storytelling to accommodate the monotony of location. This comes in the form of tonal shifts and a deeper palette of expression from the actors than may be associated with cheaper executions of horror.

The Boy Behind the Door feels akin to John Carpenter, Stanley Kubrik, and Dario Argento simultaneously in their use of framing, transition, and tonal structure. Layering grit and shadow against transitions of monochrome wash is a stroke of genius that will feel familiar to all students of the genre, but not cliche.

Fans of John Carpenter will instantly recognize the unsettling angles and frames used to add an extra level of dissonance (see images below for comparison) as well as the blue-black tones pervasive throughout the film.

Stanley Kubrick disciples will notice the emphasis on close up shots of both victim and villain, as well as a few scenes that feel like true homages to The Overlook Hotel, another stellar single location horror piece.

Those familiar with Dario Argento will see strong tonal shifts and monochromatic washes as seen in Suspiria and Deep Red, adding a change of atmosphere in the otherwise consistent setting for this predatory picture.

This film offers a masterclass in creating tension through framing, lighting, and color, and should be on your list for this reason if nothing else. That said, the performances given by the cast, particularly Lonnie Chavis and Ezra Dewey take this from a cold exercise in cinematography and pacing into an empathetic nightmare. Drawing from a broad range of expression, these two work through the greatest test in their young friendship, highlighting the many different emotions and states that encapsulate the horribly traumatic events that can happen to children.

The critic in me says that I should find fault, to nitpick at what could have been better, but I honestly think that The Boy Behind the Door accomplished what it set out to do, scared the hell out of all parents in the process.