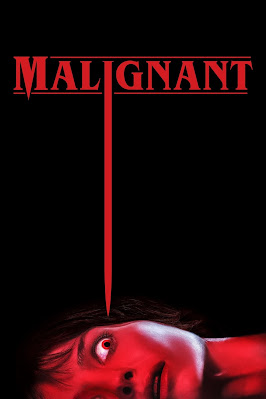 There’s intriguing divisiveness that exists around James Wan and the popularity he has achieved with his films. The divisiveness that, in all honesty, I am not sure I fully understand. Perhaps it's one of those situations where individuals feel attacked because a non-mainstream genre has suddenly had some crossover into mainstream territory and that’s offensive to them. My love for the director, writer, and producer has certainly earned me some ill will from very boisterous negative commentators, but quite frankly, I find his style of modernizing classic genres and giving them his own auteur twist is fun and refreshing.

After dropping one of the biggest box office hits ever (edit: I just looked it up - yes, it currently resides in the top 25 globally) in Aquaman, Wan - in all of his audacity - took his massive blank check and used it on Malignant. Granted, Wan has always been one to go back to his mid-budget horror films in between larger projects as a director. Not to mention, he always keeps one foot in the door as a producer to shepherd in new talent under his guidance, but Malignant is next level. Not only does this film deliver on the usual Wan elements - atmosphere, supernatural aspects, and sharp visuals, but its absurd blending of genres, mixed with a hyperkinetic build in its pacing, and a blisteringly outlandish third act make it one of the most potent “instant cult classic” films I’ve ever had the chance to see. Malignant is brash in its love letter to the past but also brings such strange energy to the fold that it slices n’ dices its way to being one of the best of the year.

Malignant is working on a lot of intriguing layers here and depending on the scene, or moment, those layers are constantly shifting and moving. If anything, the film may be one of the biggest ‘blank checks’ that exists for a director and Wan rarely hesitates to cash in on it. It’s the reason why this film has already been so divisive amount horror fans. If you’re willing to buy into the wild ride that Wan is selling, then you’re on. If not, good luck trying to make heads and tails of frappe style of mixed pieces.

The tone of Malignant is everywhere. The film opens up with a ham-fisted, overacted, and a rather silly sequence in a hospital that sets the tone for a Stuart Gordon meets Henenlotter creature feature. However, it quickly shifts from that to the usual Wan material. The first act is mostly ghostly. There are tons of haunted house elements, shady figures, and mysterious imaginary friends. This is the director setting up its audience at its most James Wan-iest. It’s delivering the classic lighting, the supernatural tension, slow build, and character-focused material that audiences have come to expect. Almost to an annoying degree. The performances are solid, but most of it is par for the course, and the scares are well executed - but predictable Insidious/Conjuring stuff.


By the second act, the film has started to convert into a proto-early 2000s slasher with giallo remixes. The audience is introduced to a black-gloved killer, named Gabriel, in a high collared black trench coat with cascading black hair and an Italian-inspired trophy turned into a murderous knife. The film absolutely layers on stylistic lighting choices and a supernatural spin that connects the killer and the lead character, Madison - played with the wide-eyed gaze of classic Italian horror actresses by Annabelle Wallis. It’s here that Wan is drawing this strong 90s and early 00s Dark Castle Entertainment vibe too, particularly in the modernization of the visuals, and yet it’s hard to see how it even remotely connects to the first part and its haunted house stage setting.

Of course, this all leads to the third act. I’ve often hashtagged films over on my Letterboxd account as something that was #SavedByTheThirdAct. Granted, the first two acts are not a misfire, but they feel like a disjointed conjunction of different styles and thoughts elevated by an obvious love of the influences. However, this third act is so absolutely insane, it manages to not only tie everything together in one of the strangest and most bonkers way possible, but it happens to shine a light on a slew of various themes about misogyny, gender roles, the interplay between victim and assailant, and so many other surprising layers. Quite frankly, Malignant is essentially made by the audacity of this third act which even injects a whole new genre into the mix. It’s so bold, ballsy, and brilliant.

When it’s all put together, Malignant might be one of the most insane films from the filmmaker that gave us three separate hit horror franchises about demons, parallel supernatural dimensions, and a serial killer who uses moral traps built out of bear traps. How the film will continue to hold up on multiple viewings after the shock of how it all fits together like some kind of psychotic puzzle remains to be seen. However, the sheer entertainment of its oddities, the shock of its reveal, and effective execution make Malignant one of Wan’s best and one of the best slices of cinema this year.

Written By Matt Reifschneider
Posted by DarkReif at 9:04 PM