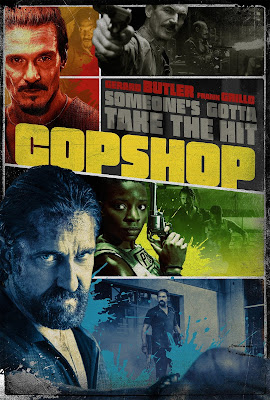 Joe Carnahan has had a prolific career in stylish action flicks. Whether it was his debut film Smokin’ Aces or his other film in 2021 Boss Level, Carnahan is a fairly safe bet when it comes to entertaining action films loaded with interesting choices. His latest, Copshop, follows very closely in those steps and maybe, just maybe, perfects it. Built on the foundations of using 1970s cop thrillers as its basis, but also as some stylistic choices, Copshop is a romp and a half. It’s littered with broad stroke characters painted with bullets and quick banter, a slow-burn build to set the chessboard, and some fantastic performances. It’s a smartly written mid-tier action thriller with some scene devouring casting that ought to curb the craving for most genre fans. Copshop, like so many of Carnahan’s films, is already a cult classic.

The influences that Carnahan and company are pulling from are immediately evident in Copshop. The title sequence, complete with 70s style font and music pulled from Magnum Force, sets the tone as does the banter happening between two of the police officers that will represent a chunk of the strangely deep ensemble cast. The style is initially almost overwhelming, through the edits, the manner that night sequences are shot, and even in the relentlessly quick dialogue, but like all of the director’s films, it becomes part of the world.

If anything, the style is so interwoven with the substance of its narrative and characters that the ebb and flow of when it arrives is hardly jarring as it might seem on the surface level. The entire ensemble, led by the trifecta of Butler, Grillo, and Louder, is absolutely game to embrace the heightened sense of reality and mixture of 70s and 10s style. Butler and Grillo naturally come in swinging with their usual screen saunters with just enough layers to create a duality of “charming assholes we love to hate” but it’s Louder that completely dominates this film as a badass, but lovable protagonist, Val. If Hollywood doesn’t give her all of the roles going forward then I’m rioting. However, the entire cast is out to make a mark with the story and direction benefiting from their ability to show up and absolutely make a scene.


The script gives the cast plenty of material to work with though. The writing, as with many of Carnahan’s films, is lightning-paced, filled with quotable material, and brimming with personality. The insanity that comes out of Huss’ character Lamb is both hilarious and completely unhinged in a slightly disturbing way while the banter between the three leads throughout the film digs into the power dynamics at play with its “what is being said in between the quips.”

This powers the relatively meticulous pacing of the first two-thirds as Copshop distinctly sets up its players on the chessboard of its limited police station setting. The ability of the script and tone to shift between thriller tension, deep black humor, and the occasional slapstick moment is pitch-perfect. This all culminates in a riveting third act that unleashes all of its players who begin to trade in their quips for bullets. The action is crisp and well shot, only now and again showing the fringes of its budget. It’s not the wildest roller coaster ride from the onset, but the manner that the film is set up for the payoffs is deliciously fun and highly entertaining.

As with so many mid-range action films, audiences have been hesitant to jump into this one - as noted by its middling box office and poor marketing from Open Road Pictures, but don’t sit on an empty chamber with this one. Load up, take aim, and pull the trigger on the sheer enjoyment that Copshop represents as a 70s action thriller through the lens of a post-modern director.