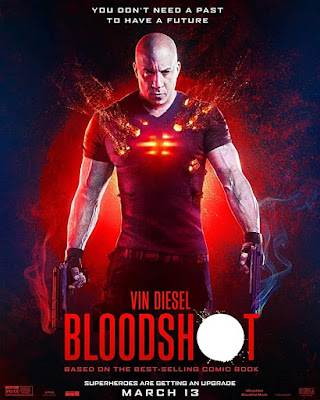 Considering that we are living in a golden age of cinematic comic books, it makes sense that Bloodshot would get an adaption. What makes this one stand out against its peers though is that it doesn’t quite feel like other massive Marvel or DC films. It oddly feels like a comic book film that would have dropped in the late 90s or early 00s. Unlike other films of a similar tone, i.e. Venom, this one doesn’t quite find the balance between outlandish fun and dark/serious vibes. As it’s meant to be a kickstarter for a new ‘shared universe’ with other Valiant comic books, it’s something of a swing and a miss.

Through its entire run time, Bloodshot franticly tries to find that sweet spot. Starting with its script, which has an insane number of credited writers – including Jeff Wadlow who is a fairly accomplished director in his own right, the film struggles to figure out what it wants to be as a film. It wants to craft a moral statement about the expendability of soldiers, but it also wants to just have Vin Diesel punch a lot of half-robot super baddies. Both sound great, but Bloodshot can’t carry them both. What we get is a movie that uses its moral theming to barely thread together a narrative about recreating memories and reintegrating into a society that has moved on, whether you choose to believe his memories with his wife are anything but wholly fabricated by the evil corporation that has turned him into a superhero with nanobots for blood, and then it just frantically pummels its audience with all of the Vin Diesel tropes they want like sleeveless shirts, grumble-growled one-liners, and a sense of modern action insanity where physics don’t matter.

Even if it’s solely the latter that draws you to a film like Bloodshot, the significant problem is that this film struggles to deliver that on a high level. Director David S.F. Wilson, in his feature-length directorial debut after delivering one of the best episodes of Love, Death & Robots, cannot help the script deliver on its promises. The genre-blending of science fiction, action, and humor feels off – particularly when the comedic relief side “tech” character pops up, and the action of the film is a mess. There are some fun sequences to be had here, but it’s edited and shot in a way that makes any real action incomprehensible. In particular, a chase sequence between Vin Diesel’s Bloodshot and two biomechanical baddies through some alleys and streets sounds great on paper. It’s just visual vomit onscreen that never creates a cohesive sequence. It’s incredibly frustrating at times since the final fight sequence seems to be decently put together, yet the rest is a wild crapshoot of material.

That’s the essence of Bloodshot. It’s a film that wants to give some semblance of a thoughtful character, perhaps thematic weight, to what comes off as a Punisher meets Wolverine style titular character and story. However, it seems stuck in trying to deliver the usual Vin Diesel style tropes to generic audiences and not even doing that very well. It’s constantly underutilizing its pieces, whether it’s a stacked cast that included Guy Pierce and Eiza Gonzalez or some fun concepts, and it feels like the filmmakers are trying to serve the steak both raw and overcooked. Perhaps it’s a film that garners its cult audience over time, but at this point – Bloodshot is not a shot worth taking unless you’re a huge fan of the star.

Written By Matt Reifschneider
Posted by DarkReif at 11:26 AM