Gather Up the Violence: The Roundup (2022) Review 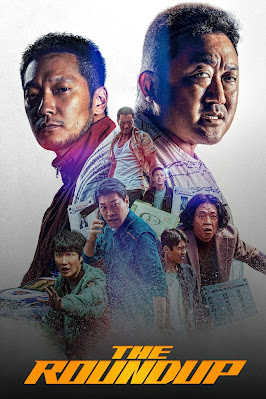 The beast cop is back in a follow-up to one of South Korea's most entertaining thrillers of the last 10 years, The Outlaws, only this time we ditch the standard 2 numbering of a normal sequel and instead go with the oddly titled The Roundup, which is such a simple and less exciting title than Outlaws 2, but I digress. Is this sequel anywhere comparable to the sheer awesomeness of the stellar first film? In short, absolutely, and in some ways, it excels even more (i.e. the action).

Ma Dong-seok, aka Don Lee, is back as Ma Seok-do, the smart-mouthed, heavy-hitting train of a cop who does whatever he must to bring the baddies in to meet justice. He is more charismatic than ever in this film. He really shined in the first entry of this series, but here he seems to embody his character even more, sinking himself into the role. There may not be a ton of depth to the character, but Ma brings such a level of bravado and sheer power to the character, you can't take your eyes off of him. He can be a gentle giant one second, and then the next he is punching you through a door, or a window... or a wall.

Many returning fans will be curious about the action. Let me tell you, it is just as brutal and even more action-packed than the first film. Ma mega punches his way through every scenario. It is so entertaining and highly exhilarating to see him send people flying left and right. The villain here, played to ghoulish perfection by Son Seok-koo, is a wicked ball of energy that matches the beastly nature of our tankish hero. While you always feel that Ma will win in the end, that does not ever mean that the main baddie here isn't absolutely heartless and terrifying. There are several sequences where I was shocked by how ruthless he was.


Getting into the very few gripes I have towards the film, I would have to say, right off the bat, I absolutely hated when Ma and company traveled to Vietnam and the film immediately got that very Hollywood yellow-tinged visual to everything. Film fans know exactly how stereotypical it has become to shoot these countries in this putrid color. When they do eventually return to South Korea, the color scheme returns to a beautiful naturalism. Bring on the eye-rolling. Also, this might be personal preference, but I hope in the currently shooting The Outlaws 3 that the beast cop finally meets someone who gives him a proper run for his money. I get that he is practically a walking death machine, but I want to see him be broken. It ultimately up the stakes at hand and it would make for an even more intense outcome. Again, I am not sure it is even a criticism, but the danger can sometimes feel a bit safe as Ma never seems to be taken down a notch.

Yes, the hype for The Roundup aka The Outlaws 2 has been through the roof for the fans and the time I had with the film was very fulfilling and highly entertaining. Action fans are gonna eat this one up and fans of Korean cinema in general (or of Ma Dong-seok) will find a lot to be satisfied with here. I cannot wait to see the conclusion to this hard-hitting trilogy of action thrillers. My highest recommendation!

If you want to check out The Roundup, you can find where to watch it at all kinds of digital retailers at this LINK!