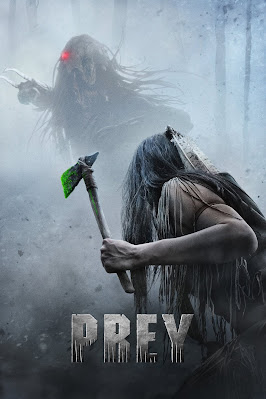 The Predator has become a cinema icon for those of us in a specific age range. Not only because the original Predator film was a massive success and a staple of VHS rentals or purchases, but because the villain character is just so fuckin’ cool. The lore around the alien hunter was only built in the discoveries of the films’ main characters, the design was both awe-inspiring and horrific, and the manner that the Predator has evolved with time evokes visceral emotions from its viewers (both good and bad). Enough so that the series, to wavering effect, has struggled to find a protagonist to match the titular walking slaughterhouse since Arnold went bicep to bicep with it.

Until Prey, that is. But we will get to that.

After a wildly too complicated, offbeat, and messy fourth film in the franchise, also confusingly titled The Predator back in 2018, 20th Century Fox went through a lot of evolution themselves. Mainly, they were purchased by Disney and became 20th Century Studios. As the studio merger has settled into a pattern, with Disney converting their newly acquired toy into their “adult genre film” arm, the major franchises needed reassessment. Including Predator.

With their first Predator film under new management, 20th Century Studios brought on 10 Cloverfield Lane’s director Dan Trachtenberg and did the smartest thing a “reboot” or re-evaluation of a franchise could do - go back to basics. Go back to the survivalist style of storytelling, focus on the hunt, deliver a few key fun action set pieces, and let the characters exist in the world. This is what Trachtenberg is bringing to the forefront with Prey and it is - to put it mildly - stupidly brilliant.


It’s in this simplicity, where its unique angle is the setting - the 1700s in the Northern Plains following the plight of a small Comanche group, that allows Prey to succeed. There are only a handful of characters, adding in some French trappers to deliver a larger body count for the Predator to string up for the audience, but they keep it intimate. It is a recipe for delicious carnage because the film can focus on strong character development in its first act for a few key individuals then slowly add in the action as it goes.

The intentions of Trachtenberg with this side-story can be boiled down to its title. This is, like the original, a film where its heroic protagonists drive the plot rather than the villain. If Arnold and his team were set up to be predators by the government in the original one, only to be faced down by another killer, it’s fitting that the Comanche group at the heart of this story is not one defined by their invasive tendencies. They are survivors and their respect for the order of things in nature is threatened by the Predator. The tagline says it all: They hunt to live. It lives to hunt.  Now that’s an interesting spin on the material. 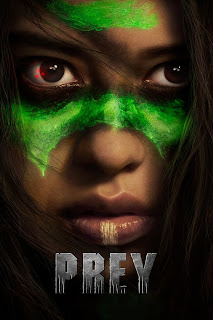 In particular, it’s Amber Midthunder’s character, Naru, that solidifies all of the great things Prey has going for it in the set up and deliver. With expressive eyes that serve as the film’s greatest special effect, her plight to prove herself as a warrior because she was told that “she can’t be,” is the perfect one to match against the big bad. As I mentioned before, this is the first time in a Predator sequel that the series has truly found a new protagonist whose character and drive holds its own against the alien menace. Hell, Naru is the best character of the franchise thus far and watching her grow as a warrior to earn the respect of her peers, along with saving their lives, is the kind of hero’s journey that this franchise desperately needed. Add her kick ass dog, Sarii, into the mix and Prey has the right balance to match the sheer intensity of its villainous franchise star.

Prey paces itself like it’s the origin story of the titular villain too, confirming all of the lore we’ve come to love for a “new” Predator who brings to Earth some fancy new weapons and a slightly updated look. Prey does an incredible job of using its gorgeous cinematography and practical effects to create a realism around the Predator in this film and Trachtenberg shoots the action with the confidence of a modern director channeling his inner John McTiernan. Even when the Predator is not featured, the film knows how to edit and pace an action sequence. Watching Midthunder whip a knife around to kill some grotesque trappers is entertainment enough in all of its brutal and gory ways, but all of the action works splendidly.

Some of the CGI effects can be a bit of a stretch on the film’s budget, but the way that Prey uses them to compliment the action breaches those issues with relative ease. Something as easy as a chase sequence through chest high grass becomes a tense moment to see the invisible force easily close distance from its God Eye shot from above. When the CGI feels strained, including a vicious bear attack that was featured in the trailers, Prey showcases it in a way that it is hard not to be caught up in the whirlwind of action or thrills. Then it is smart enough to punctuate it with a visual moment that’s not easy to forget, like a literal blood bath.

To be honest, Prey is smart in how it justifies its existence as a side story in a long beloved franchise that its very basic formula feels refreshing. It is the balance of smart character writing, an incredible lead performance, and memorable action set pieces that ought to serve as the blueprint for so many other franchises to follow. It is effective in its adventure storytelling and still manages to add in some great new Predator moments for fans.

Not only is Prey the best Predator sequel, but it also does something many thought unthinkable. Prey gives Predator a run for in all of its action icon glory.