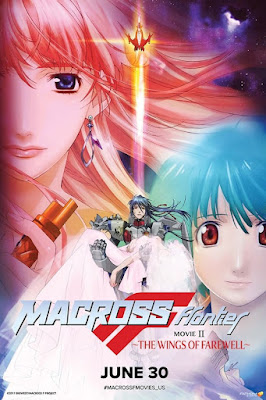 Although I already had my ticket loaded for Macross Frontier: The Wings of Farewell after seeing the first Macross Frontier film two weeks prior, my gut feeling was not the most hopeful. Despite its highlights, the predecessor was something of a mess and a missed opportunity in my book (you can read my full review over HERE if you would so like) and it relatively dashed my expectations for the second film. Did I really want to see if they could piece together the shattered remains of tones and narrative left in the wake of The False Songstress?

With that in mind, The Wings of Farewell is, surprisingly enough, a substantial step up from Macross Frontier: The False Songstress. It fixes so many of the issues that plagued the previous one in its tonality and general character development. It’s not a perfect film, particularly in its stuttered narrative, but it’s entertaining enough and features some significantly fun set pieces to catch both old and new fans of the Macross world.

Although The Wings of Farewell is a truncated, remixed, and remade version of the latter half of the Macross Frontier series, the manner that it plays out very much feels like a sequel to the previous film. It does its best to recap the major points for the characters from The False Songstress, but really this one is meant to be a continuation and requires its viewers to have a basic understanding of the romantic triangle, the essence of its conspiracy subplot, and the war with the giant space bugs that almost immediately kicks off from minute one.

In telling the continuation of this plot and how the three lead characters Alto, Sheryl, and Ranka fit into everything, The Wings of Farewell almost immediately is hitting a very quick pace. If you don’t remember, well you’re fucked. This one isn’t hitting the breaks for anything. On one hand, what this does is it trims and consolidates the tonality issues of the predecessor. This feels more like a traditional Macross story with its space battles, science fiction plotting that weaves into J-pop concerts, and thematic romantic character work. It doesn’t have the time to diddle into teen raunchy humor or try to half-ass world build. It’s got places to be, aliens to blow up, and new villains to uncover. In a way, it’s a more entertaining and driven film that does deliver on the basics that one wants and trims out some of the meandering material laid out before.


On the other hand, The Wings of Farewell still tragically feels like 6 to 8 hours of a TV show mashed into 2 hours. There are incredible leaps of character, plot, and thematic material that are barely brushed on before the film is folding itself into the next set piece. An entire new plot about how part of the the conspiracy is meant to train the new girl J-pop star, Ranka, into being an unwitting body part donor for Sheryl is completely thrown to the wind in act one for it to rarely come back. Then, it feels the need to add in new military villains - that don’t really show up until halfway through the film - to make all of the conspiracy even more convoluted while injecting an entire new cyborg plot just feels like the turkey is likely to burst if you stuff it anymore. New characters are haphazardly introduced while older characters are thrown into the mix to just die (and not die or vice versa) and the entire whirlwind of material suffers for it. Yes, we get that you need to reinterpret or regurgitate the TV show here, but The Wings of Farewell is leaning towards a “more is more” as a life moto. 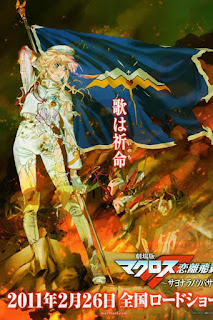 Yet, despite all of that, The Wings of Farewell does manage to pull of a few miracles in the crossfire. The three lead characters get to have their romantic drama pulled out from the distracting rubble of their teen anime silliness and the themes around the space bugs, the Vajra, certainly take the limelight as the major theme of the film. Much of the material around how Sheryl and Ranka are connected to the Vajra reeks of science fiction mumbo jumbo, including both throat and gut bacteria that make the Vajra think the two pop stars are actually space bugs (?!), but it works for its ecological themes and how nature is interconnected even in a world of cyborgs, flying spaceship planets, and mech-jets. Hell, they even give a little green bug squirrel a reason to exist in the film outside of merchandise. It’s kind of impressive in its own manner.

Ultimately, Macross Frontier: The Wings of Farewell may not be the humanistic science fiction action spectacle that fans will love, but it manages to fix the trajectory of the duology of films. It’s entertaining in its action, even if the combination of CG and classic animation still feels very 10 years ago (when the film first came out in Japan), and the themes for its plot and characters ring true beyond the swirling chaos of its narrative. The film is still silly and, yes - you do get to see a giant mech surf its way through the atmosphere of a planet, but it’s not boring. That’s a huge improvement.

As a side note, I much preferred the songs and music in this one for J-pop than the predecessor, but that’s more of a personal preference rather than something that is inherently connected to the success of the film.

For Macross fans, The Wings of Farewell suffices to be a fun addition to the collection, but it’s hardly one of the best of the franchise. Still, as someone that has yet to see the TV show this was created from, it manages to work even if it has to claw its way through the flaws.

Written By Matt Reifschneider
Posted by DarkReif at 3:52 PM