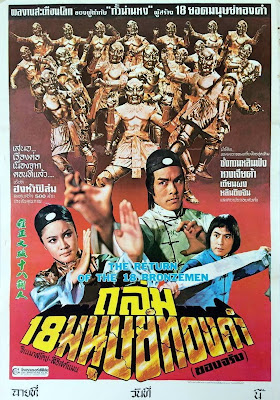 It’s not that difficult, really. Making a sequel to The 18 Bronzemen is as simple as it gets when it comes to kung fu cinema. All one would need to do is choose a new character or characters, send them to the same temple that featured the Bronzemen littered challenges, and voila. Instant sequel. In its own way, the loose sequel that did eventually come out, The Return of the 18 Bronzemen, does exactly that. New character, new Bronzemen challenges, new movie.

Yet, there are so many strange choices buried in this film that it’s both a film that is superior AND inferior to its predecessor. In its own way, The Return of the 18 Bronzemen is a film that leans into the tropes of the kung fu movie, playing on the expectations of the original or other films of its ilk, and then taking a massive leap by undercutting expectations as it goes - particularly in its final act. It creates a film that feels as though it’s at a tug of war with itself. One end pulling towards mainstream fan appeal. One end pulling towards subverting it.

As a sequel, don’t give The Return of the 18 Bronzemen too much merit. It happens to use the same gimmick, metallic painted fighters as a challenge in a temple, and that’s it. Even the repeated cast members, most notable being Carter Wong who moves from supporting to lead status here, are not the same characters. It’s also often referenced that The Blazing Temple is a loose sequel to this one. Maybe, but considering that film had an earlier theatrical release in Taiwan then it’s one hell of a stretch to call it the third film, even if it is a possibility.

On its own, this montage-heavy kung fu flick has a loose and perplexing narrative that feels like the first act of a much larger story. It’s one of the more intriguing ways that The Return of the 18 Bronzemen is able to play on expectations. Carter Wong, in a performance that maximizes his natural onscreen intensity, plays a conniving character that cheats his way into being the big honcho. The problem is that he is tasked with destroying Shaolin. To do so, he decides to infiltrate the temple, under a pseudonym and proceed to learn their ways by going through the Bronzemen challenge before burning them to the ground.

On the surface, sure, having the villain as your main character and then going to the Shaolin temple to complete the challenges while learning how to be a great leader is a great way to present its moral quandaries. Carter Wong is expertly cast to do just that and the manner that Joseph Kuo handles the Bronzemen challenges might be some of his best and most creative work as an action director.


The problem that arises here, and this does include a huge SPOILER for the film so if you haven’t seen it please feel free to skip to the next paragraph, is that the final act just never exists. It doesn’t. Wong’s character, Yong Zhen, never completes the challenges, and the film is left on a final scene where he has learned nothing and proceeds forward with his plan to extinguish Shaolin. Roll credits. It’s one of the most perplexing endings since Sword of Doom. They don’t even bother bringing back Polly Shang-kuan as the female fighter from the opening act, who is set up in a very particular way to be a fantastic secondary character. She just, also, never gets an ending. Granted, there are a ton of stories regarding why the film ends this way - for more sequels or that it was only a partial script - but the fact remains that it does and it leaves its audience either blown away at the audacity of pulling this off or scratching their head in bewilderment. For me, it was a little of both.

The journey to get to that point is an impressive one. The fight work is incredible, including a pure smorgasbord of weapons work, creative use of sets, and visual dynamics. If you loved what The 18 Bronzemen was doing, this one does it even better. The setup with Carter Wong’s Yong Zhen is expertly done, establishing that even with his underhanded tactics he does have some sort of moral code - even if it is just an act - and it hooks its audience incredibly fast to set up its plot. For the first two acts of a movie, The Return of the 18 Bronzemen might be some of Joseph Kuo’s best work. And that deserves some credit.

Still, it’s hard not to wonder if The Return of the 18 Bronzemen could have been if it had not left its plot, characters, and themes hanging out to dry when the execution of those exact things is some impressively done. Call it artistic merit, undercutting the tropes of the genre, or whatever you might, this film feels like it’s only 66.66% of a full movie. That 66.66% is 110% fucking awesome and some of Kuo’s best work, but keep that in mind when going into this one.

Written By Matt Reifschneider
Posted by DarkReif at 8:00 AM