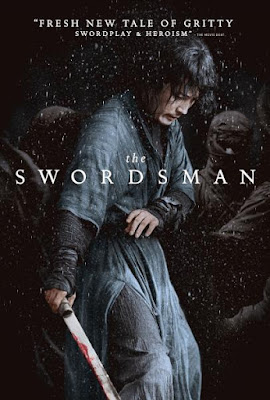 Far be it for me not to admit that, dammit, I love a blind swordsman flick. Whether it’s the couple of dozen Zatoichi films, the oft-overlooked Crimson Bat series, or standalone films like The Sword of Swords, if a film has a swordsman who happens to lose (or mostly lose) their eyesight, you can count me in. For the latest addition to this long-standing trope of martial arts cinema, the blandly titled The Swordsman, South Korea takes a swing at the trope with a fairly unique balance of modern revenge, historical placement, and classic chanbara foundations. The results, even within the formula, are highly enjoyable and the film’s attempts to ride a fine line between serious and camp are commendable throughout. It’s a slash-tastic time if one is willing to loosen up and run with the tried-and-true tropes that The Swordsman is drawing.

Although this film owes much of its existence to its origins in chanbara films, specifically those produced quickly in the 60s and 70s that made the genre pop out in cinema, there is one fascinating aspect to it that sets everything aside when it immediately shows up on screen. The Swordsman is ‘based on a true story.’ Sure, I’m one that becomes immediately skeptical when that pops up in a film due to the gimmicky nature of the claim, but it’s an aspect to this film that gives it a slightly different tone and angle. For all of its genre elements and occasionally cheesy moments, the film attempts to ride a line of historical context and grounded reality. Its opening scene is a political coup, one that haunts the lead character and defines the events of the rest of the narrative, and the quintessential Japanese baddies that arrive are tied to the time period. The intentions are clear and like so many South Korean films, the use of costumes, sets, and other period elements are incredibly well done. Very little in the film feels overly exaggerated and the style is defined.

If anything, while the historical backdrop and setting provide intriguing deviance from the usual sword slashing material, it’s also perhaps the one portion that detracts from the strengths of the film. That’s because The Swordsman is blissfully action-packed and driven to provide the classic swordsman tropes in full. After a sword fight leaves our hero, played with the stoic intensity of a John Wick inspired badass trying to not get involved, losing his eyesight, his ability to raise his daughter is compromised. That’s right. Our hero Tae-yul (Jang Hyuk) is a single dad and ex-royal guard, who just happens to find himself drawn into another bout with a group of rogue Japanese fighters looking to politically snake their way through the system. When his daughter gets involved and finds herself captured by the villains, led by a swaggering intensity from Indonesian and now international ass-kicker Joe Taslim, one can set their watch to when Tae-yul goes rampaging through the ranks. It’s gimmicky, but deliciously so.

The action is shot similarly to that of the live-action Rurouni Kenshin films, highlighting the hero’s speed, and the clean choreography and diverse set pieces make for a film packed with action. The Swordsman rarely pulls from the blood, although it’s not inherently gory, and the director keeps things moving with different scenarios including one-on-one duels and a very slick “one take” where our hero takes on a slew of gun-armed soldiers. Even when the film is a bit paint-by-numbers, it’s hard not to be enticed by the sheer ferocity of its action.

Certainly, my bias towards swordplay films features heavily in my enjoyment of The Swordsman, but it’s hard to deny that this film doesn’t deliver on its promises of genre quality. It’s riddled with tropes, but the execution of those tropes is where its strength lies. Whether it’s the beautiful period piece setting, the modern brisk revenge plot, or the balance between classic chanbara and modern intense action set pieces, The Swordsman is a film that knows its roots and enforces them with its details. If anything, The Swordsman could easily deserve a multi-sequel franchise of its own like so many of the series it takes inspiration from and, in all fairness, I’d be there for every single one. The Swordsman is simply a cut above the rest.