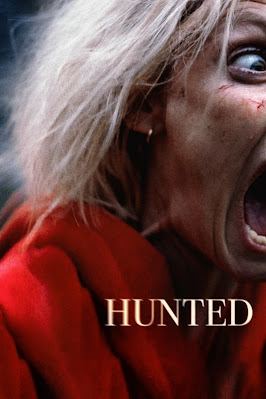 The cycle of recycling continues. It’s a general rule of thumb that trends and style will eventually come back into the rotation, through a modern lens mostly, but it’s only a matter of time before something buried resurfaces. Color me surprised though when Hunted, the latest Shudder Exclusive to drop on the now illustrious horror streaming service, was proudly replicating the style and tone of the French New Extreme of the early 00s. A loose retelling of the Little Red Riding Hood fairy tale, Hunted strips all of the fairy and fantasy of the story and replaces it with grit, grime, and just a touch of influence from Last House on the Left. It’s an often uncomfortable watch, intentionally so, but fans of that dark and violent style will definitely howl with delight at what Hunted is offering.

Although the film is in English language, a choice that seems to reflect the attempt at making the film a more versatile option in the global distribution landscape, there is that distinctive Mainland European flair to the proceedings that immediately sets the groundwork for the mentioned French Extremism. The film starts with a more fantastical moment, where a grandmother tells her grandson the tale of a woman who is raised by wolves to survive the volatility of man, and it’s gorgeously shot in a modern meets classic style of animation. It’s here that the film establishes a sense of purpose to its narrative and it’s a tone that seeps into both the plot and style of the latter half in some intriguing ways.

Yet, after this initial fantastical bent, Hunted whiplashes its audience by leaping aggressively back into a grounded and realistic tone. Powered by two incredible performances, Lucie Debay as the woman and Arieh Worthalter as the villainous man intent on making her life hell before taking it, the film jackknifes into a cold and dirty reality, seemingly aiming to combine the tone of a rape-revenge film with moments of intense violence, gore, and disturbing concepts. I invoked Last House on the Left before and it’s here that this comparison can be made in earnest. Particularly with the unhinged nature of its antagonist. Yet, oddly enough, it’s also at this point that the film feels it’s mostly going through the motions. If it wasn’t for the impeccable performances, Hunted might have floundered into the mundane as it sets up its finale.

Despite all of this, including the strange, fairy tale opening and the whiplash into reality, the third act takes a fantastical and sly slide into dream-like territory which combines the two approaches. To go too far into detail would be to betray the manner that director Vincent Paronnaud smoothly reincorporates the opening or some of the fun spins of narrative, but it’s in the last thirty minutes or so that the film shows some of its bolder choices as a piece of cinema - including one of the most unusual choices for paintball I’ve had the pleasure of seeing.

The Little Red Riding Hood lore might be one that is continually adapted, remixed, and converted with every trend throughout the history of storytelling, but Hunted is certainly one that fits with the times and still manages to take a nod toward other styles of the past. While the main plot might run through familiar motions, the combination of stark performances and odd tonal tangents make it worth the watch. And, hey, since it's available on Shudder, why not spend 90 minutes with it?

Written By Matt Reifschneider
Posted by DarkReif at 10:43 AM