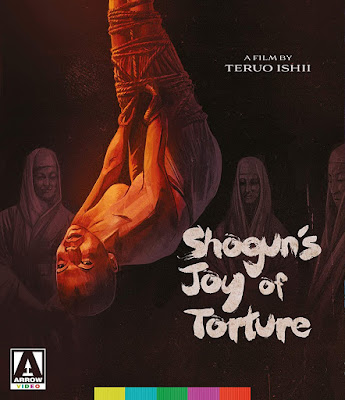 One of the best things about many of the recent Arrow Video acquisitions is their intentions to dig up some of the missing cult classics from the King of Cult, Teruo Ishii. They’ve already released a handful of his filmography, an insane amount of films for those who want to attempt counting them, and their latest, Shogun’s Joy of Torture, brings back one of his most sought-after and acclaimed titles from his pinky violence era. Like many of the other films released by Arrow, this 1968 exploitation flick is an omnibus of three stories centered around the titular theme - old-school torture elements from Japan’s history. It’s not one of his best, but for those looking for a slab of interestingly made provocative cinema, it’s hard to go wrong with this one.

In a similar vein to other recent releases like Yakuza Law and Orgies of Edo, Shogun’s Joy of Torture is meant to be an anthology film that leans heavily on the exploitative elements - in particular the pinky cinema ilk that Ishii helped establish in the late 60s. Just like those films, it comes with its pros and cons, especially in its structure as a film filled with three stories that lacks any real wrap-around format to draw in the viewer. Is this film about a man reading three separate stories of torture and punishment in a book? Sure, but there is no loftier goal than delivering on its promise of sex and violence in many of the messages.

As for the three tales, there is a general mixture of tonal intent that attempts to differentiate each tale, even within the promise that all three will result in elongated scenes of sadism and sexuality. The film gives its audience a range of protagonists that all fall within the formula. A tattoo artist is driven insane by a corrupt and villainous rich man. A nunnery collapses under the weight of a love triangle that tears apart spirituality through carnal lust. And the film oddly starts with a brother and sister fighting against a system built to exploit their position in society which leads bafflingly to incestuous results. The third story about the tattoo artist is perhaps the best of the three, but it’s one that feels very akin to a superior film from Ishii called Inferno of Torture. Although the stories are all linked thematically and in the structure that promises a torrential rise of depravity, they do fit together in a way that speaks to the film as a whole. 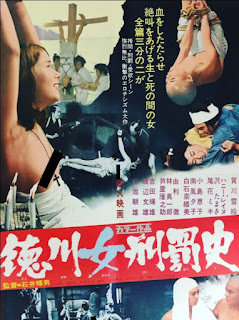 However, it’s not like most people are leaping into Shogun’s Joy of Torture are not coming for the script and narrative strength. While Ishii captures writing credit for the movie, it’s his direction and ability to add impressive theatricality to the proceedings that makes a film like this worth viewing. It helps that the performances are all around nuanced underneath the theatricality, particularly in the manner of narrative build for the final story for the two men that occupy the various spectrums of morality, but really it’s the tonal balance of drama to the exploitation that Ishii works with that allows Shogun’s Joy of Torture to move smoothly. Even when Ishii is at his most ‘hired gun’ for a director, his talent seeps through all of the cinematic pores. It’s a statement to his incredible talent at least.

All in all, like many of his anthology films, Shogun’s Joy of Torture is just inherently a film that requires Ishii’s skills to arrive at its destination as a piece of cult cinema. It’s a gimmick film where none of the stories quite have enough time to truly generate the punch they might have in a longer form in terms of drama or character development, yet the quality of direction, performance, and visual pizzazz make it a film worth the watch if one is interested in the pinky cinematic world of the era. It’s foundationally a flawed and hollow film and yet the execution is strong enough to carry through to be a worthy addition to Arrow’s lineup for collectors. Shogun’s Joy of Torture is hardly as torturous to its viewer as the title would indicate and that is purely through the talents of its auteur director.

Written By Matt Reifschneider
Posted by DarkReif at 6:39 PM