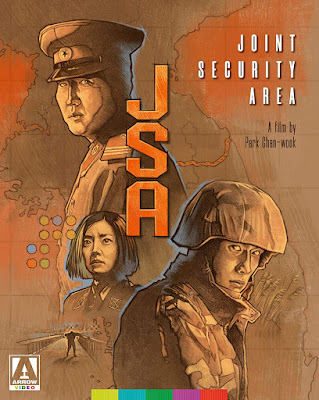 Park Chan-wook has become synonymous with the bright streak of artistic talent coming out of South Korea since the mid-90s. Even though Bong Joon-ho is the one that might be a more household name since he swept his Oscars last year, it was Park Chan-wook that was previously the name to know when it came bold cinema from the market. What makes the director’s career so interesting is that he has increasingly moved further from the mainstream with his films, despite attempts to break out in the international market with English language films like Stoker. And while his third film, Joint Security Area, might be one of his most mainstream ones, it’s a flick that doesn’t shy away from the style and themes that made Park Chan-wook such an iconic artist. With its most recent Blu Ray release, it was only the perfect time to revisit the dark military thriller to see if the film holds up.

Based on a popular novel and released in 2000, Joint Security Area was a film that seemingly struck gold with audiences. Well regarded and earning some solid box office bucks, it was also a film that seemingly lingered in film festival purgatory for quite some time before getting a wider US release in 2005. Joint Security Area proves to be an impactful dark socio-political thriller, but it’s one that’s heavily rooted in its culture. Any film about the relations between North and South Korea is going to be one where the nuances may be lost outside of the area for a wider audience. No matter what lens is being used to dissect those feelings.

Yet, despite my own lack of understanding to the real emotion that’s embedded in Joint Security Area, it’s easy to see why it found its audience. The film rides this incredibly fine line between an old school murder mystery and dense military drama, never leaning too far one way or the other in an attempt to create an impeccable tone and atmosphere. Park Chan-wook handles the material with incredibly nimble hands by using the popular film school 1990s approach of non-linear timelines to unweave a story that has already occurred by the time the film starts. With a third-party investigator, played as the audience surrogate by Lee Yeong-ae, the plot unravels an investigation about a skirmish between border guards from both North and South Korea. Flashbacks, artfully done which consume most of the second act, reveal a bonding friendship between the guards and the events that lead to the murders that are being investigated.

Considering the conceptional scope of the film, there is an intimacy to the material with its small ensemble cast that works as the heart of the film. Park Chan-wook has a knack for visual stillness and timing that works in the favor of its cast and draws some intriguing parallels about reality versus perception. However, it’s the cast that truly soars. Lead by a double-barreled blast of Lee Byung-hun and Song Kang-ho as the two characters across the border, Joint Security Area soars under their nuanced work and immaculate chemistry with these two and the other two characters, played by Kim Tae-woo and Shin Ha-kyun. Enough so that as events continually take spins between hopeful and hopeless, the audience is gripped with the ride. It all eventually culminates in an intensely desperate finale that steals one’s breath. If you’re afraid that it won’t touch on some of the darkness of the director’s other works, don’t worry.

For fans of Park Chan-wook, the stars, or just incredibly dense and tense cinema, one still cannot go wrong with Joint Security Area. This latest Blu Ray release is just as packed too, with an interview of Jasper Sharp highlighting the new material, but this film might be better now that the auteur director’s career has showcased the themes and style that are more subtle at this point in his filmography. It’s still an intense experience that ought to be praised for the landmark it is in the pantheon of international respect for South Korean cinema. 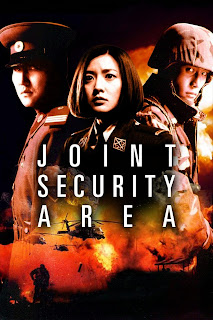