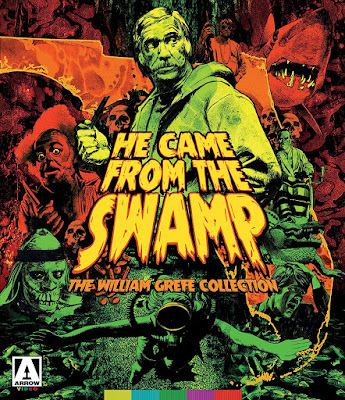 Although I don’t claim to be a particular fan of the microbudget horror, fantasy, and science fiction films of this era – as I am most certainly reminded regularly from my reviews on Herschell Gordon Lewis’ films here on the site, part of me was excited to dig into this latest box set dedicated to the strange works of director William Grefe. All of these films were new to me and each disc of the set will be covered in a series of articles here on the site – which reviews the films on each disc. So, hop in your swamp boat with me, buckle in, and let’s take a dive into the works of Grefe in this gorgeous new release from Arrow Video, He Came from the Swamp: The William Grefe Collection!

Here is disc three: The Naked Zoo and Mako: Jaws of Death. 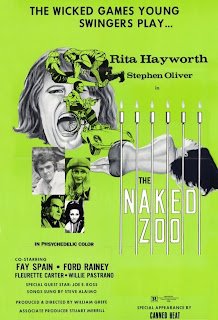 Moving right along in terms of developing films that take a snapshot of the culture in the late 60s, director and writer William Grefe jumps headfirst into the hyper-sexualized culture of the era with The Naked Zoo. Similar to the freewheeling ‘chaos’ that defined his last two features in this boxset, this film intends to cut a slice of life moment from the era to explore the morally gray area around the life of a sexually free and responsibility averse writer, Terry (Steve Oliver.)

What makes The Naked Zoo intriguing as a film is that, in an attempt to give the film momentum and purpose to its narrative, it backdrops its main character Terry into a thriller situation caused by his charming and freely active sexual nature. When his love affair with a woman is discovered by her husband, a scuffle ensues and he is accidentally killed. The problem is, that while it eventually does come back around in a – dare I say – effective third act reveal, this backdrop is not the driving force of the script and the rest of The Naked Zoo ends up borderline forgetting that plot exists except for an occasional moment. The rest of the film is made up of Terry jumping from woman to woman and finding himself in odd situations. Had the tone been more comedic, then the film could have easily been a sex comedy. However, the meandering ‘slice of life’ approach makes it feel more dramatic and character-driven.

This approach does have its moments, particularly as it features a fairly subtle performance from Oliver as Terry to carry it. The Naked Zoo, however, struggles to find a provocative way of keeping its viewer engaged throughout. The second act ends up dragging with its vignette structure and it undermines some of the more interesting concepts at play. It works well as a partner film to the previous film in the set, but all in all The Naked Zoo is more of a cinema curiosity than a cult classic. 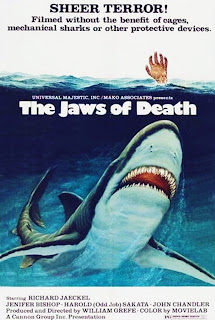 The second film on this disc, perhaps the most well-known of William Grefe’s career, is Mako: Jaws of Death. Although this was a first-time watch for me, my expectations for the film were that it was simply a film made to capitalize on the success of Jaws in the 1970s. That is true to a certain extent, but what I found in Mako, a film with too many titles, is that it’s a much more absurdist and enjoyable experience than so many of the sharksploitation films that followed in Spielberg’s wake.

Almost immediately, it becomes apparent that Mako is a familial film in concept, tone, and execution to Grefe’s earlier film, Sting of Death. Enough so that it could easily be considered a thematic sequel if one squints hard enough. While the plot is generally simple, where a man carries a necklace that allows him to connect with sharks and how he tries to help other people learn to respect nature and understand in the way that he does, the film is more or less a film that focuses on its messages more than plot. This makes watching the film a bit of a challenge, thanks to a more lackadaisical sense of purpose and driving narrative, but it also allows it to really hammer home its environmental and animal-friendly message while simultaneously delivering a few scuba diver kill sequences in the mix.

As with the other films, Mako tends to be a film where its execution can undercut some of its depth. The performances are patchy overall, particularly with the bigger than life secondary characters including a somewhat thin performance of the main villain, and there is a romantic subplot that never finds the emotional core to actually carry the weight needed for the characters and narrative. Still, when all is said and done, there is enough of an interesting idea at home here to make it one of the best of this set.

Written By Matt Reifschneider
Posted by DarkReif
Email ThisBlogThis!Share to TwitterShare to FacebookShare to Pinterest
Labels: Arrow Video, Drama, Fantasy, He Came from the Swamp: The William Grefe Collection, Horror