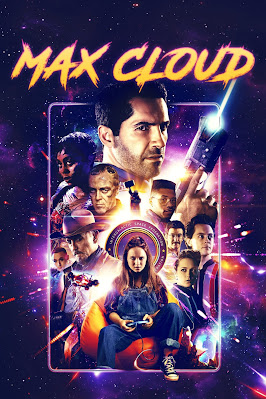 Also known as: The Intergalactic Adventures of Max Cloud

It only makes sense that there would be a boom of video game movies in the aftermath of two very successful Jumanji sequels. Of course, by ‘video game movies,’ I mean movies that inherently involve deconstructing video game tropes and are not directly based on video game IP. And by that, I mean films that feel more like Jumanji 2 and 3, but aren’t Gamer, an underrated gem of a film that deserves a bit more credit, but I digress. This is where Max Cloud presses starts and joins the fray. In essence, this little can do low-budget film takes the same basic idea as the last couple of Jumanji films and then gives it a decidedly fun intergalactic beat-em-up spin. Quite frankly, if it wasn’t for the Scott Adkins casting, I’m not sure this would have made my list to watch. Yet the pleasant surprise of the film being a delightfully entertaining experience was a bonus and for those looking for a fun way to burn 90 minutes, look no further than Max Cloud and his rowdy band of intergalactic ass-kickers.

In a way, Max Cloud is a rather intriguing throwback kind of film. The film is technically a period piece, set in 1990, and it starts by taking a young girl, Sarah, and having her suddenly transported into the body of a cook in her favorite beat-em-up video game, Max Cloud. When her friend Cowboy stops by, she convinces him to finish the game so she can return home.

While I made a point to indicate that this film may exist due to the success of the previously mentioned action-adventure films, while watching the film it becomes apparent that the film has more in common, in style, to films of the late 80s and early 90s. Films like The Wizard or The Last Starfighter seem like a basic influence. With that in mind, particularly in how the film tends to be a family-oriented film with a bit of an edge at times (more on that in a second,) then perhaps the foundation to appreciate what Max Cloud has to offer becomes clear.

From that point though, enjoy the ride. Max Cloud is a rock-em, sock-em action comedy with style to spare. It works on two narratives, the players (the real world) and the characters (the video game world) and it regularly bounces between the two to keep its pacing and structure brisk. Truthfully, while both narratives are overtly hyper in their style to represent, it’s hard not to just love the neon-soaked, original Star Trek-inspired lens of Max Cloud’s world. While all of the actors in the film seemingly understand to keep tongue firmly planted in cheek in all of the delivery, the characters in the video game are gloriously over the top and fantastically charming. The film balances out its budget nicely by using the two narratives, most of the boss battles are stylized as 16-bit action on the TV screen or in the format of a fighting game for example, and it keeps it feeling like it knows its limitations and uses them to its benefit.


Now, the Scott Adkins’ element of the film is the main reason that Max Cloud ended up on my viewing queue and it does not disappoint. As the titular character, Adkins gets to ham it up as a boisterous Kirk like captain looking to get his ship and his crew off of a very dangerous planet. His charm is in overdrive here and his ability to act idiotic AND arrogant simultaneously carries a lot of weight in the film. Of course, his co-stars can be charming in their own way – particularly Tommy Flanagan as a space mercenary who shows up later, but Adkins steals the show here.

To go along with the comedy and the silliness of its video game premise, Max Cloud is weirdly packed with over-the-top action. Since the video game is a beat-em-up one, similar to Streets of Rage or Double Dragon, it gets to play to the benefits of an Adkins vehicle and throw in a ton of hand-to-hand fight sequences. The weird thing is – most of them are pretty fuckin’ good. Strong stunt work, fantastic fight choreography, and a pension to make the scenes a bit more violent than expected for a family-friendly film all just add solid effectiveness to the material that is wholly unexpected.

All in all, Max Cloud might be one of the more entertaining experiences I had in the last year. Perhaps it was the lower expectations going into the film, but it ended up being an effective flick with a fun spin of deconstructing the silliness of both campy space adventures and games of the early 90s. There are certainly some eye-rolling family lessons to be had at the end, none of which were fully explored in the narrative, but the manner that it blazes by and succeeds in being a stylish action comedy makes it a little low budget gem. Power up and check it out now.

Written By Matt Reifschneider
Posted by DarkReif at 6:26 PM