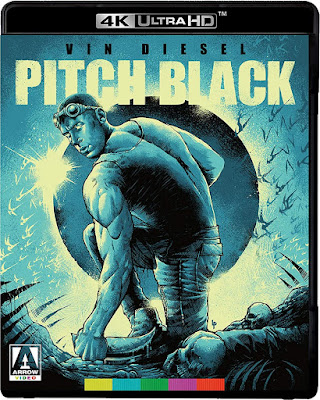 Vin Diesel’s career has certainly had its ups and downs and, quite frankly, most of his key franchises feel like roller coasters of quality as they careen around attempting to find their footing. One of those happens to be the Riddick series which saw itself soar so high, the sun melted its wings, and it quickly crashed to the ground to become a passion project series for the divisive actor. It’s origins in Pitch Black, the little-film-that-could, are still impressive though. It’s a tight, ambitious, and effective piece of science fiction horror that still holds up. The latest 4K release of the film, courtesy of our friends at Arrow Video, is a welcome upgrade to the previous Blu Ray in my collection that sports not only a slew of the various original and new features, but a gorgeous transfer that maximizes one of the key aspects of its visual style.

When a passenger ship attempting to navigate the back routes of space is hit by a freak meteor storm and crash lands on a desolate desert planet, the small group of survivors stake a claim to find a way off. Not only are the limited resources and harsh terrain an issue, but one of the members happens to be an extremely violent escaped convict with the ability to see in the dark. When the three suns set, it unleashes a volley of very hungry monsters on the survivors and they are left with only one choice - to trust another monster who can lead them through the dark.

Pitch Black oddly stands up even decades after its release. This is often a problem with science fiction. If the balance between technology and fantasy isn’t in line, it’s a genre that can often feel dated if it leans too heavily one way or the other. This first film of a trilogy (and rumored fourth entry) manages to ride that line with a grace not usually found in lower-budget genre pieces from this era. The designs are both rugged and yet futuristic, the alien creatures that aim to consume the ensemble cast are memorable and gimmicky, and the setting - a deserted science station on a planet with three suns - makes use of minimal sets and a desolate tone that benefit the horror elements nicely. Perhaps some of the CGI doesn’t hold up, the 4K restoration doesn’t help much there, but the rest of the designs and execution of the science fiction elements still work.

The strength of the long-term resilience in Pitch Black though is not in the designs or the basic ‘survival’ plotting. As much as the monsters and concepts are strong enough to carry the film, it’s the characters that resonate long after the film has finished. There is a reason that Vin Diesel’s Riddick became an overnight sensation and his performance feels completely in conjunction with what the film needs from him. However, Pitch Black, on the whole, knows how to utilize the anti-hero well within the ensemble. It’s through strong and morally gray characters and performances from actors like Radha Mitchell, Cole Hauser, and Keith David that add layers and dynamics to the script. Director Twohy handles the ensemble well and allows the characters to play off of one another to create the dramatic heft that drives the science fiction and horror elements forward at a brisk and impactful pace. By the time the various secondary characters are being picked off by monsters and circumstance, the film has developed a handful of characters that an audience cares about.

An aspect of Pitch Black that the new 4K restoration brings out is the incredible lighting that director Twohy brings to the forefront. The film has a lot of thematic weight to the ideas of “darkness” and “light,” manifested in so many of the choices in the plot, narrative, and visual. This new restoration really pops in with the visuals that Twohy uses for this - the blacks are darker and deeper and the scorching brightness of the first half of the film is shockingly more effective than before. While this is not a film that I expected to maximize a 4K restoration, thanks to the early 00s CGI and some of the style choices of the period, the manner in which it really emphasizes the light and shadow elements makes it a worthy upgrade.

All in all, Pitch Black remains a fantastic cinematic gem. The combination of science fiction, action, and horror is pitch (black) perfect here and the combination of a thoughtful approach to the visuals, designs, and character work make it a film that holds up even after a couple of decades. The rest of the franchise remains a mixed bag, but there’s a great reason that Arrow Video dropped the new 4K home video release of this one - and it’s not just because Vin Diesel probably needed more money for his Last Witch Hunter sequel. 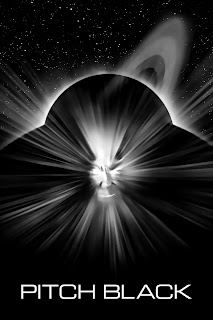