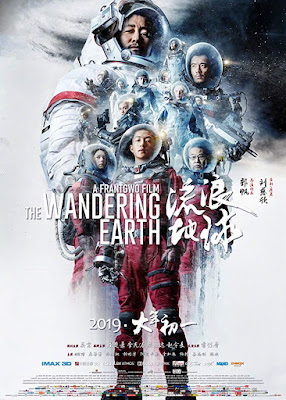 Based on a popular book, which is given quite the visual homage in the end credits, The Wandering Earth tells the story of a united humanity desperately trying to save the Earth. In many ways, it is a checklist of the various elements that have made the disaster/end of the world adventure picture so popular through various time periods. Large ensemble cast? Check. Earth in danger from some otherworldly obstacle that humanity must overcome? Check. A wildly fast race against time? Check. Massive disaster focused spectacle? Check. For the proclaimed “first” big budget science fiction film from China, it pulls heavily from the Hollywood formulas that have proven to be box office successes in both the US and China.

The Wandering Earth pulls no punches in wearing its influences on its sleeves. Whether it’s the science fiction tinged adventure and massive destruction of Roland Emmerich’s films like 2012/The Day After Tomorrow or the more intimate space threats that parallel sequences and tones from Gravity and 2001: A Space Odyssey, even American viewers are going to understand the various sequences.  However, it’s not a leap of faith to see that much of the humor and nuanced narrative elements are focused on its Chinese audience. This is the science fiction action blockbuster through the lens of the Chinese film industry. There were many times during the screening that a joke or reference would be made by characters that brought out bursts of laughter from the theater’s mostly Chinese audience and while the content went over my head, it was enlightening to hear that it was hitting home with its intended audience and they were very much enjoying it.

In terms of execution, The Wandering Earth is more of a mixed bag. The film is focused on the spectacle of its concept (which has thousands of giant rockets on one side of the Earth flying the entire planet away from an expanding Sun – and the world gets caught in a gravity spike from Jupiter and the people on Earth need to figure out a way to get out of the pull and not crash the planet – yes, that’s the plot, I kid you not) and that can be fun if not a bit hollow in itself. The special effects are surprisingly great for a modern Chinese production, which has always seen visual effects as salt in the wound of the industry, but the film tends to blaze over its plot holes with its entertaining characters and action-oriented thrills instead of smartly navigating around them. Still, the film has a fantastic cast to pull it off, featuring Chinese box office juggernaut Wu Jing as an astronaut on a space station helping navigate the Earth and Ng Man-tat as a truck driver who’s grandson and adopted grand-daughter must help a rescue team deliver a machine part on the icy surface of the Earth, and there is a great sense of chemistry and ensemble work to embed far more heart into the plot than expected. The direction from Frant Gwo nimbly leaps between the various characters and plotting in an impressive manner, weaving together the narrative and ratcheting up tension and excitement when needed to deliver on its promises for the audience.

The Wandering Earth is not some kind of high art in cinema, but it very intentionally never believes that it would be seen as such. This is China’s answer to the Hollywood sci-fi blockbuster and their interpretation of such might be more effective in distilling the reasons why that genre has always been so popular with mainstream audiences. It has a great ensemble cast that treat its bizarre plot like it’s the most important performance of their careers, the action and adventure is thrilling and wildly entertaining, and Gwo has a knack for not letting to science heavy mumbo-jumbo of its script bog down the sheer cinematic experience of the film. It’s more popcorn flick than thought-provoking science fiction, but for all intents and purposes, The Wandering Earth is a massive success. Both in its box office release and as a genre film.

If you get the chance, don’t hesitate to check out The Wandering Earth in theaters. With the scope and spectacle, it’s the best way to see it.