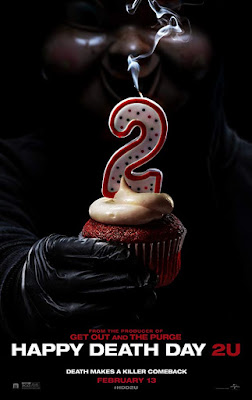 While I have already seen a bit of backlash against this from fans online, the best choice that’s made right away with Happy Death Day 2U is that the film moves away from the slasher foundation. Yes, it’s still there in many ways as Tree (once again played with rambunctious energy by Jessica Rothe) is forced back into a time loop where a masked killer, rather unintentionally, keeps resetting the day. However, that portion becomes something of a subplot and means to end – pun intended – rather than the foundation of its ‘young woman learns life lessons’ character and narrative core. Instead, the film moves slyly further into science fiction territory as it introduces more time loop concepts and starts to include a team of college science nerds trying to fix the inherent problem. There are still plenty of killers to be unmasked and the body count, mostly Tree’s, does exist, but it’s not the root of what this film intends to be.

From there, Landon and company slather the film in sillier concepts and more outlandish reveals. Happy Death Day 2U is even less grounded than the first, although the heart remains firmly in places as Tree must continue to grow as a person and learn to live in the present and not the past, and it makes for a wildly entertaining film. A very effective secondary cast, fleshed out a bit further since most of the introductions were made previously, adds a great sense of comradery and comedic pay off here and the film hardly hesitates to go to some outlandish sequences. A recreation of the initial premise, but using the main love interest’s roommate Ryan, is a great way to get the audience back into the swing of things while doing something slightly different, for example.

The one thing that Happy Death Day 2U might have against it is that it wholly and very heavily relies on its audience to remember even smaller details from the original. For fans, it makes for some delightful moments that play on expectations, but for those who may have only casually watched Happy Death Day, the sequel may not be as effective. The film just doesn’t have quite the same set up and pay off structure of the first and at times it shows that strain as it attempts to further build the mythology and jokes. It’s hardly a huge issue, but one that can be problematic for some viewers.

Happy Death Day 2U is simply one of those sequels that hits all of the right entertainment elements. It doesn’t just rehash the same style and concept, even as easy as that might have been, and it takes the premise and runs with it to the next level, playing on the audience’s expectations in some fun and surprisingly smart ways. It’s not quite as efficient with its material, but another phenomenal performance from Rothe and the various characters in her time loop along with a wild sense of inhibition with the material make it a great sequel and impressive genre film.

Here’s to hoping that the film does well enough for them to truly close the loop and finish off the trilogy.